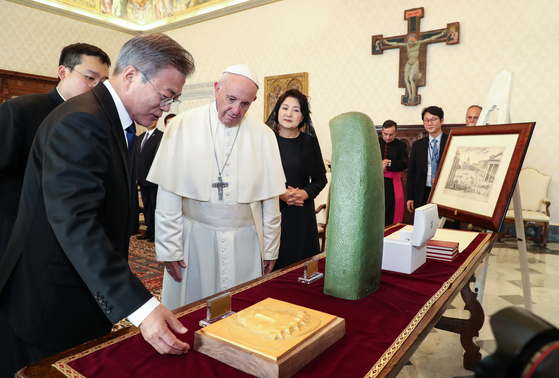 Korean President Moon Jae-in, left, meets with Pope Francis at the Vatican on Oct. 18, 2018. Moon kicks off a nine-day trip to Europe Thursday, which includes a visit to the Vatican Friday. [YONHAP]

President Moon Jae-in begins a nine-day trip to three European nations this week for talks with the pope and a G20 summit in Italy, the United Nations climate conference in Britain and a state visit to Hungary.

The first stop will be at the Vatican, where Moon will meet with Pope Francis Friday to discuss promoting peace on the Korean Peninsula and resolving global issues including poverty, climate change and the Covid-19 pandemic, said Park Kyung-mee, the presidential spokesperson, in a press briefing last Friday. Moon, a Catholic, will also meet with Vatican Secretary of State Cardinal Pietro Parolin.

This marks Moon’s second visit to the Vatican after a trip in October 2018.

At the time, Pope Francis expressed his wishes to visit Pyongyang and said he will make such a trip when he receives an “official invitation from North Korea.” Moon in turn relayed the pontiff's message verbally to North Korean leader Kim Jong-un. The trip has yet to come to fruition amid a standstill in denuclearization negotiations with the North since 2019.

Next week’s visit “will serve as an opportunity to share wisdom with world religious leaders who have practiced universal love for humanity,” said Park.

Pope Francis had consistently expressed a desire to visit Pyongyang, and repeated such intentions again in June after he appointed Korean Archbishop Lazarus You Heung-sik, formerly a bishop of Daejeon, as the new prefect of the Congregation for the Clergy.

The archbishop in a press conference said that he will do his best to carry out his mission if he is given a role in arranging a papal visit to North Korea.

Seoul’s Unification Minister Lee In-young will accompany Moon, leading to expectations that the Korean Peninsula peace process will be discussed in detail at the Vatican.

U.S. President Joe Biden is scheduled to visit the Vatican to meet with Pope Francis on Friday, according to the White House. Seoul has been hoping to get North Korea denuclearization dialogue back on track, and a papal trip to Pyongyang, which if arranged would the first by a pope, could be one way to prod along such discussions.

A key Blue House official said Friday, “We expect a wide-ranging dialogue on the Korean Peninsula peace process with the pope, who has expressed deep interest in the Korean Peninsula issue, and as he has mentioned numerous times he would like to visit North Korea, I believe such discussions will also come up.”

You was confirmed as Covid-19 positive on Friday. He is reportedly asymptomatic and carrying out his duties while undergoing a 10-day mandatory quarantine period.

Moon will join other world leaders at the G20, or Group of 20, summit in Rome scheduled for Saturday and Sunday to tackle issues including the climate crisis, the pandemic and global economic recovery, the Blue House said.

The Blue House said that other meetings are being arranged to be held during the G20 gathering. This year’s summit has three pillars of action: “People, Planet, Prosperity.”

On Nov. 1 and 2, Moon will attend the COP26, or United Nations Climate Change Conference, in Glasgow, Scotland, expected to be attended by the leaders of some 130 countries.

Moon will announce at the conference Korea’s new 2030 nationally determined contributions (NDC) targets to reduce greenhouse gas emissions by 40 percent from the country’s peak in 2018 as a part of efforts to respond to the climate crisis and aim for carbon neutrality by 2050.

The president is scheduled to give a keynote speech in a session on action and solidarity.

In the third and final leg of his Europe trip, Moon will make a three-day visit to Hungary from Nov. 2 on the invitation of the central European country’s president.

This marks the first visit by a Korean president to Hungary in 20 years since former President Kim Dae-jung in 2001.

Last year, Hungary erected a monument to commemorate the Korean tourists killed in the deadly ferry sinking in Budapest in 2019, and Moon will visit the site and pay tribute to the victims on Nov. 2, said the Blue House.

On May 29, 2019, the Hableany ferry capsized on the Danube River, near Margaret Bridge, after being hit by a larger vessel, killing 25 Korean tourists and two Hungarian crew members. One Korean is still missing.

On Nov. 4, Moon will meet with the leaders of the Visegrad Group (V4), the Czech Republic, Hungary, Poland and Slovakia, in Budapest.

The Visegrad Group, a political alliance of four Central European states, is the second-largest trading partner and largest export market in the European Union for Korea. The visit is expected to serve as an opportunity to expand cooperation in promising industries, such as electric vehicles (EVs) and batteries, the Blue House said.

The president wraps up his European tour on Nov. 5.