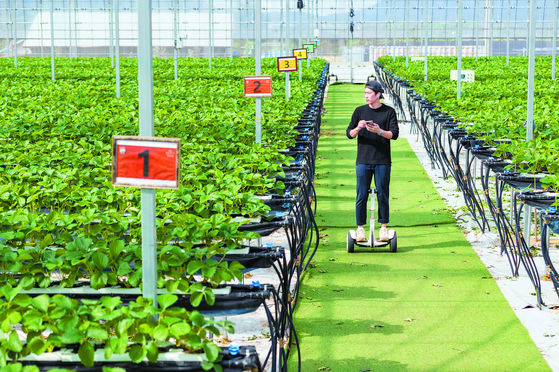 An Hae-seong, 38, monitors his strawberry smart farm through his smartphone in Pocheon, Gyeonggi, on Tuesday. [JEONG JUN-HEE]


When Lee Jae-hun, 39, moved out of his small-town home in North Jeolla to become a doctor, he never imagined he would again return to settle down, let alone become a farmer.

“While I had a successful career, I increasingly grew tired of the high pressures of city life,” Lee said. “Once I finally admitted to myself that I was unhappy, I began to consider a different career, outside of the city.”

One of a now growing number of Koreans opting for life in the countryside, Lee now farms mushrooms for a living in a small farming town in Muju County, North Jeolla.

According to Korea Rural Economic Institute, a total of 494,569 people migrated to the countryside in 2020, up 7.4 percent from the year prior.

In particular, the number of people in their 30s who moved to rural areas recorded an all-time high last year with 1,362 people — a 12.7 percent on-year increase.

Farm life has become especially attractive to some younger people who don't view the rice paddies and cornfields as simply lush, fertile stretches of land, but rather as an attractive stage for a start-up.

Lee Seon-hwa, 38, said that she decided to quit her job as a senior designer at a furniture company when she spotted an opportunity to improve sales of an agriculture association corporation in her hometown of Jukshin in South Jeolla.

Farming barley during the day and working on product design in the evenings, Lee's modern touches on the packaging design paired with online marketing strategies were an instant hit.

Since her arrival to the village five years ago, the village farming association corporation’s online profit went from zero to an annual average of 600 million won ($507,000).

An Hae-seong, 38, is another small-town native who decided to return home to Pocheon, Gyeonggi, to start a strawberry smart farm last year — giving up his annual salary of 80 million won at a construction company in return.

Smart farms are farms that incorporate technologies like sensors and artificial intelligence to allow farmers to check and manage various conditions on the farm, such as sunlight and humidity, through their smartphone.

“The agriculture industry bears endless opportunities now that new technologies such as artificial intelligence and smart farms have become available,” said An. “It is as advanced as any other field.”

Kim Seon-ho, 62, who has been the village leader for the past 10 years in Okcheon County, North Chungcheong, said that the atmosphere in his village has changed with the influx of young people.

“In the past, the residents would hold certain prejudices against the young newcomers, assuming that they moved to their village because they got fired from their jobs or because they couldn’t get married,” Kim said.

“But now, residents all welcome newcomers, as well as their ideas, knowledge and skills that they bring into the community.”

While the agriculture industry is one full of new potential and wealth, those who dream of quick success in the sector and move a rural area without proper research and preparation can face bitter failures, including fraud.

“Those looking to find a new livelihood through farming should explore government support and training programs and prepare for at least one to two years,” said an official of the Ministry of Agriculture, Food and Rural Affairs.

One popular young farmers' support program by the ministry is called "Living as a farmer."

Through the program, aspiring farmers under the age of 40 can get a taste of the life as a farmer in one of 88 counties and rural cities before deciding to move.

Housing is provided for up to six months, and all expenses are covered by the government.

Jeong Cheol, 37, was a salaryman in Gwangju who joined the government’s “Living as a farmer” program four years ago and went to Gangjin County, South Jeolla.

During the program, Jeong received various farming training, which is also state-run.

When the program was over after six months, Jeong felt that he was ready to officially begin work as a permanent farmer in Gangjin County. He moved there with his wife right away and is currently running a successful strawberry farm.

This year, the ministry said that the number of participants of the "Living as a farmer" program has well passed their annual goal of 500, with over 600 participants already registered as of September.