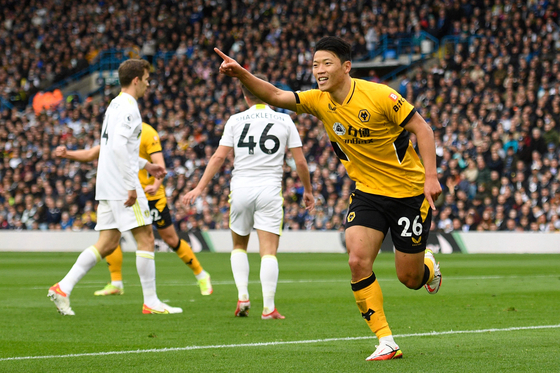 
Hwang Hee-chan once again proved crucial for Wolverhampton Wanderers on Saturday, scoring the club's only goal in a 1-1 draw with Leeds United at Elland Road in Leeds, England.

Hwang got things started early, finding the back of the net in only the 10th minute for Wolves. Picking up a rebound off a shot by Raul Jimenez, Hwang controlled the loose ball before sending it past the goalkeeper with the outside of his foot to take the score to 1-0.

Wolves appeared to sit back after the single goal, allowing Leeds to increasingly control both the ball and the game. Although the Yorkshire club appeared to have taken charge, it wasn't until the very end of the game that Leeds managed to score, with a penalty four minutes into injury time. Leeds converted, tying the score at 1-1 with no time left for a rebuttal.

Hwang has now scored four goals in six games with Wolves, quickly establishing himself as a dominant force at the midlands club. Three of those four goals have involved Jimenez in some way — two of them as official assists — setting up the Korean-Mexican duo as a serious playmaking partnership with plenty of games left to play.

“[Hwang is] doing well," said Wolves manager Bruno Lage after the game. "We knew when we brought him, we knew the quality of the player because we followed him for three or four years and we are happy. We are very happy with the work of Hwang and all our wingers. We started with Hwang and Adama, sometimes Adama’s on the left, today he was on the right. They have to work hard when we don’t have the ball and they did very well.

"The guys are doing very well. The things I want is dynamism and hard work, and when they score goals, we are happy because it’s not the job of one guy, but the collective team.”

Wolves are currently fourth in the Premier League with four wins, a draw and four losses. The team had failed to win a game — or even score a goal — before Hwang debuted at the beginning of September.