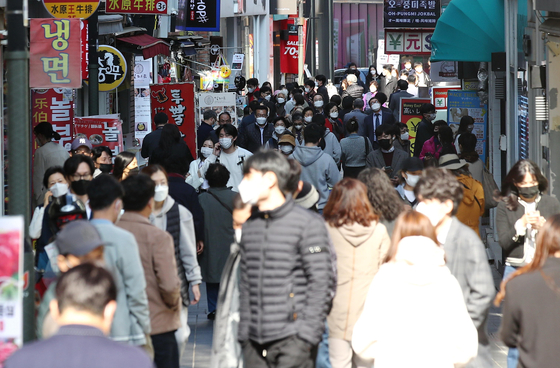 People crowd a street in Myeong-dong, central Seoul, on Monday ahead of the government's ″With Corona″ scheme, which is expected to be introduced at the beginning of November. [YONHAP]


Not everyone is celebrating the “With Corona” scheme.

Some younger workers like life under the rules established for the pandemic.

Work-at-home policies led to a decline in hoesik, company dinners and drinking sessions not always favored by the youth of Korea. More time to themselves meant that employees could pursue hobbies and leisure activities after work.

“Now I have full schedules after work including Pilates, yoga and bakery classes," said 26-year-old Yun Seon-yeong, who works for a marketing company in Seoul. "I feel like hoesik is just an extension of work. I love how I can use my evening for myself."

"If the company wants to have gatherings like we used to do before pandemic, I will probably excuse myself and not participate.”

End of remote working is what young people most dislike about the "With Corona" policy. Some say the return of the commute will reduce their quality of life and work efficacy.

“I’ve been working remotely two or three days a week, and I don’t even want to imagine the life in which I have to commute the long distances every day,” said a 32-year-old worker for a large company in Hanam, Gyeonggi. “Older people like team leaders and executives may like the policy as they have many face-to-face meetings anyway.”

“But for young workers in their 20s and 30s, remote work is way more efficient,” he added.

A 45-year-old woman who works at a company in Seocho, southern Seoul, says she misses working at the company building.

“It’s really tough going to cafes and finding suitable places to work. I miss the company building that offers everything I need to work,” she said. “The lines between work and home are blurred since the working-at-home measure.”

With the "With Corona" strategies expected to be introduced at the beginning of November, demand for outdoor activities such as gatherings, concerts and performances and overseas travel is expected to surge.

Retailers may benefit from consumer spending as a result of the new policies.

with corona back to normal covid-19 consumer sentiment