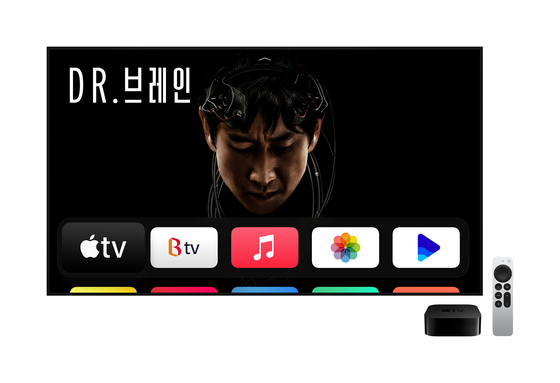 
Apple TV+ will be available in Korea starting Nov. 4 in a partnership with SK Broadband.

Customers will be able to subscribe with or without an Apple TV 4K or HD device, set top boxes sold by Apple supporting 4K or high-definition videos.

Apple announced Monday that both the Apple TV+ streaming service and the boxes will be available in Korea starting Nov. 4.

A monthly subscription for Apple TV+ is 6,500 won ($5.60). Six people are allowed to simultaneously stream the service.

People who own smart TVs from Samsung and LG can download the Apple TV application even without the Apple TV box, or they can stream from their smartphone or tablet. But they will have to subscribe to Apple TV+.

In addition, the Apple TV 4K will be available for purchase via SK Broadband on a 36-month installment plan for 6,600 won per month. Orders for the device will be taken from Tuesday through Nov. 3.

Customers purchasing from SK Broadband will be able to access TV shows and programs offered on B tv, the company’s Internet Protocol Television (IPTV) service.

Customers who buy the Apple TV 4K via SK Broadband and use the company’s B tv service will be given Apple TV+ free for six months. People who just use the B tv will be given a three-month free subscription of Apple TV+.

Apple TV+ focuses on original shows, and the company will start streaming its first Korean-language original series, “Dr. Brain,” on Nov. 4. The show is based on a popular Korean webtoon of the same title and features actor Lee Sun-kyun.

Apple also announced Monday that it will offer the Apple One subscription plan on Nov. 4. That plan will gives access to Apple TV+, Apple Music, Apple Arcade and iCloud Plus.