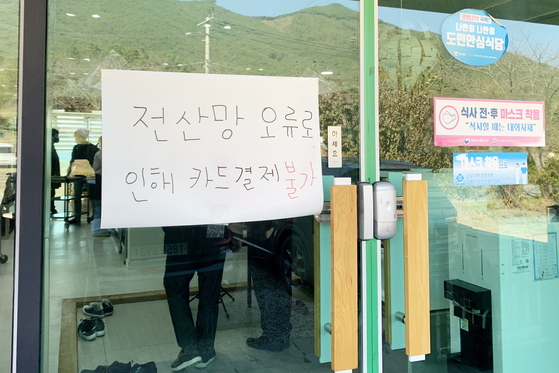 A notice at a restaurant in South Jeolla says that credit cards are not being accepted following a nationwide disruption of KT's networks on Monday. [YONHAP]


KT's networks stopped working Monday morning due to a technical error, disrupting the communications of millions of individuals, stores and companies across the nation for an hour or longer.

The country's second-largest telecommunication operator with over 10 million users initially suggested a distributed denial-of-service (DDoS) attack was the cause, but a few hours later blamed a glitch in network routing.

"We suspected the DDoS attack because of the heavy traffic detected, but it turns out that a routing error caused the problem after we closely looked into the case," KT said in a statement.

Many subscribers to KT's mobile and broadband internet services couldn’t get access to internet starting from 11 a.m. Some users saw data connections restored around 11:50 a.m., according to a spokesperson at KT.

Services were not completely restored as of 3 p.m. Scores of restaurants and shops across Seoul didn’t see their networks recovered by 2 p.m.

The Science Ministry attributed the outage to a technical glitch by KT from the start, according to local media outlets.

A spokesperson at the ministry told the Korea JoongAng Daily that an investigation is ongoing and the result will be announced later today.

The Korea Internet & Security Agency (KISA), a state-run research institute specializing in cyber security, said that a DDoS attack had not been reported.

“We haven’t seen any application for reporting a DDoS attack,” a source at the KISA said.