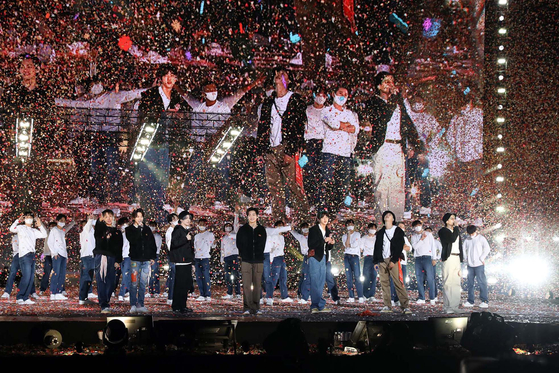 BTS performs during ″BTS Permission to Dance on Stage″ concert, which was streamed live on Sunday. [BIG HIT MUSIC]

The label did not reveal the total number of viewers.

Sunday’s concert at the Olympic Stadium in Jamsil, southern Seoul, was livestreamed as the boys performed their hit songs in an empty stadium.

The boys opened the show with “On,” which is the title track of BTS’s fourth full-length album, “Map of the Soul: 7.”
V announced that he won’t be able to dance together with the other members due to injuring his calf muscle during a rehearsal the previous day. He sat on a chair on stage and sang as normal, without dancing.

“I injured my leg while rehearsing for the concert,” V said during the concert, and reassured his fans, saying, “Do not worry too much, because I’m really okay.”

Big Hit Music said Monday that new technology was used to transmit simultaneously the concert’s powerful visual effects combined with lyrics as well as images shown on large LED screens at the stadium so that the audience could get the most out of the concert experience through their devices at home. A multi-view livestreaming service was also available for the audience so that they could select to view the performance at various angles taken from six different spots in real time.

BTS will hold an offline concert for the first time in two years at the SoFi Stadium in Los Angeles. The concert will take place on Nov. 27 and 28 and again on Dec. 1 and 2.

For those who couldn’t get tickets to the already sold-out concert, Big Hit Music said that they will stream the concert live via YouTube Theater, tickets for which will be sold separately.