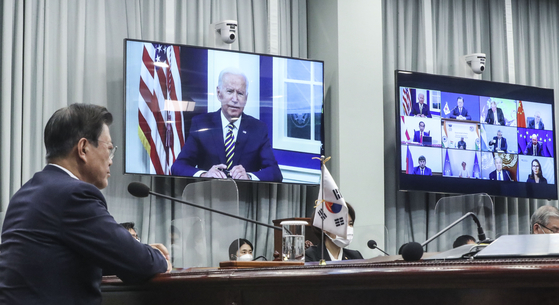 President Moon Jae-in takes part in a virtual Major Economies Forum on Energy and Climate convened by U.S. President Joe Biden on Sept. 17, ahead of the UN Climate Change Conference, or COP26, in early November in Glasgow, Scotland. The United States and the European Union announced a Global Methane Pledge that collectively aims to cut global methane pollution by at least 30 percent by 2030. [JOINT PRESS CORPS]

Korea announced Monday it will join the Global Methane Pledge in its commitment to reduce world methane emissions by 30 percent over the coming decade at the upcoming COP26 climate conference next week.

Korea’s Ministry of Environment and Ministry of Foreign Affairs announced the country will take part in the collective goal and decrease the country’s methane emissions, one of the potent greenhouse gases that cause climate change, by 30 percent by 2030 compared to 2020 levels.

The initiative will be launched at the World Leaders Summit at the United Nations Climate Change Conference, or COP26, in Glasgow, Scotland, which takes place next Monday and Tuesday.

Methane is one of the six main greenhouse gases designated by the Kyoto Protocol and the second most abundant, after carbon dioxide.

On Sept. 17, U.S. President Joe Biden and European Commission President Ursula von der Leyen first announced the Global Methane Pledge as an initiative to be launched at the COP26. The pledge is in line with international efforts to achieve the goals of the Paris Agreement and keep global temperatures from rising above 2 degrees Celsius (3.6 degrees Fahrenheit) compared to pre-industrial levels.

Methane is responsible for about 30 percent of the current global warming, according to the UN agency on human-induced climate change.

It accounts for around half of the 1.0 degrees Celsius net rise in global average temperatures since the pre-industrial era, according to the latest report of the UN’s Intergovernmental Panel on Climate Change (IPCC).

Rapidly reducing methane emissions, alongside action targeting carbon dioxide and other greenhouse gases, is seen as the most effective strategy to reduce global warming in the near term to keep with the target of limiting global warming.

Climate experts say that the successful implementation of the pledge would reduce warming by at least 0.2 degrees Celsius by 2050.

In 2018, Korea emitted some 28 million tons of methane, according to the government, mainly from the agricultural, waste and energy sectors. This amounted to 3.8 percent of the country’s total domestic greenhouse gas emissions. The country aims to cut that amount by 30 percent to 19.7 million tons by 2030.

Relevant government agencies will be preparing plans to reduce methane as a part of its road map to cut greenhouse gas emissions by 2030.

President Moon Jae-in in a parliamentary budget speech Monday announced, “The Korean government will join the international community's efforts to reduce greenhouse gas emissions by joining the Global Methane Pledge to reduce global methane emissions by more than 30 percent by 2030.”

He said that Korea has joined global efforts for 2050 carbon neutrality and agreed to raise the greenhouse gas reduction targets from 26.3 percent to 40 percent by 2030 compared to 2018.

Korea will be submitting its new nationally determined contribution (NDC) targets at the COP26, which will be attended by Moon.

Kim Jeong-hwan, head of the Environment Ministry's climate change strategy division, said, "Rather than forcibly setting reduction targets for each country, the Global Methane Pledge is a declarative goal of reducing the global emissions by 30 percent."