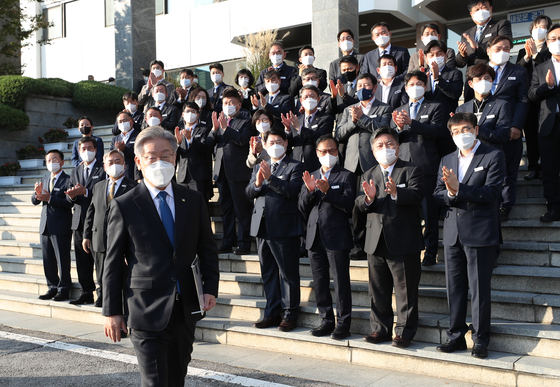 The Democratic Party's presidential candidate Lee Jae-myung leaves the Gyeonggi provincial government's office in Suwon after saying his farewell to civil servants there on on Monday afternoon. [NEWS1]


Ruling Democratic Party (DP) presidential candidate and Gyeonggi Gov. Lee Jae-myung announced Monday he would resign the governorship to focus on his presidential campaign as the main opposition party amped up their demand for an independent counsel investigation into allegations against Lee regarding the Daejang-dong development scandal.

Lee made the announcement that he was stepping down from the gubernatorial post at a televised news conference at the Gyeonggi provincial government office in Suwon.

The resignation will be effective Tuesday morning, when he is expected to register as a presidential candidate.

The DP candidate said that while the decision to resign left him "burdened with a heavy sense of responsibility," he pledged to "fulfill his calling" to run for the presidency.

Lee still has eight months left in his term as the governor of Gyeonggi, home to densely populated suburbs surrounding Seoul.

The DP candidate secured his party's nomination by winning a majority of 50.29 percent, or 719,905 votes, out of nearly 1.46 million votes cast in the 11-leg primary race that began Sept. 25 and ended with the third "Super Week" in Seoul on Oct. 10, thereby avoiding a run-off with the runner-up, former prime minister and DP chairman Lee Nak-yon, who gained 39.14 percent, or 560,392 votes.

Gov. Lee's resignation announcement came one day after the presidential candidate held a meeting with Lee Nak-yon, who had initially contested the primary results before conceding defeat.

The candidate is also scheduled to have a meeting with President Moon Jae-in on Wednesday before Moon departs Thursday for a nine-day European trip. Lee Nak-yon previously served as prime minister under Moon from May 2017 to January 2020.

As a provincial governor outside the corridors of national power in the National Assembly, Lee Jae-myung has struggled to consolidate support from within the DP.

However, in a sign of reconciliation and party cohesion, the DP candidate and former party chairman agreed to work together to win the March presidential election during their meeting on Sunday.

Lee Nak-yon also agreed to serve as a standing adviser in the party's election polling committee and pledged to lend his support for the party's victory in the presidential race.

During an audit conducted by the parliamentary Public Administration and Security Committee at the Gyeonggi provincial government office on Oct. 18, Lee repeatedly denied allegations that he masterminded the Daejang-dong development project in Seongnam to favor acquaintances during his time as the city's mayor.

Nevertheless, the PPP's leadership on Monday repeated its demand for an independent counsel probe into the corruption scandal.

The opposition party also announced the formation of a dedicated committee to examine allegations of official misconduct connected to the development project, which Lee once touted as providing housing for 5,903 families.

In a sign that he will not lay the issue to rest after the parliamentary audit, PPP Chairman Lee Jun-seok said Monday that the party will expand its task force which is currently handling the issue to bring more details to light ahead of the March election.

Although PPP floor leader Kim Gi-hyeon had publicly urged his DP counterpart Yun Ho-jung to meet with him individually to discuss the opposition's proposal for an independent counsel probe, the DP's leadership has already ruled out such calls as a waste of political energy.

DP Chairman Song Young-gil said Sunday in an interview with JTBC that the development scandal had already been thoroughly addressed during the parliamentary audit of the Gyeonggi provincial government.