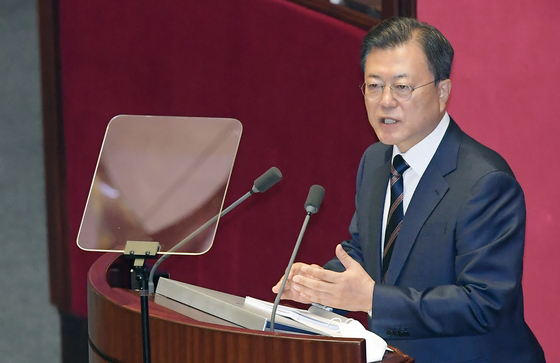 President Moon Jae-in stressed he will use the remainder of his term to return Korea to normal life and help the economy recover from the pandemic Monday in a budget speech at the National Assembly.

With around six months until the end of his five-year term, Moon said, “I will concentrate on overcoming the crisis until the end and do my best to achieve a complete return to normal daily life and economic recovery.”

Korea will begin a gradual return to normal life starting next month, as the country’s exceeded its target of a 70 percent vaccination rate, said Moon in his sixth and final parliamentary speech since he took office in 2017.

He continued, “We will now begin a phased recovery of daily life,” which will be “implemented in earnest from November.”

Over 35.9 million of the country’s population of 52 million had been fully vaccinated as of Saturday, reaching the government's target for a gradual return to normalcy.

“We are now on the threshold of hope,” Moon said.

Moon especially noted that small business owners and self-employed people, who were especially hard hit by social distancing measures, can expect to see business pick up. He said schools and welfare facilities can expect to resume normal operations.

Moon recounted his successes over the past four years, including beginning the Korean Peninsula peace process, overcoming Japan’s export restrictions and responding to the coronavirus pandemic, adding that the “crisis is not yet over.”

He identified overcoming the pandemic and finding a growth engine for the economy as the two major tasks of the government, and pledged his efforts through the remainder of his term.

Addressing economic recovery, Moon said, “Among the advanced countries, we recovered to pre-Covid levels the fastest,” noting that employment returned to 99.8 percent of pre-pandemic levels last month. He added that the economy is being “stably managed and our credit rating is at the highest level.”

However, he acknowledged that “the economy is not always rose-colored,” amid challenges such as a faltering global supply chain and a change to the world economy as countries plan for carbon neutrality.

Moon said this year’s tax revenues will be more than initially estimated at the time the budget was submitted, some of which will be used to repay the national debt and improve fiscal soundness.

On achieving carbon neutrality by 2050, Moon said, "It is a global task and a major challenge that will determine the country’s fortune.”

He said he “fully understands” concerns by industry and pledged that the government “will not let companies face the burden alone.”

At the same time, he added, “It is time for the people to take action.”

He said the supply chain reorganization is a chance to expand Korean companies’ entry into markets and that carbon neutrality targets “provide an opportunity for new growth engines and job creation.”

Moon said, “In particular, we will realize the dream of becoming a leading hydrogen nation and an energy powerhouse by striving for a hydrogen economy as a key future strategic industry in the carbon neutral era.”

He noted that K-pop and other Korean cultural content including dramas, movies, games and webtoons surpassed $10 billion in exports for the first time last year. This popularity is spreading to related industries including K-beauty and K-food.

Moon steered away from commenting on political issues, seemingly in consideration of the presidential election next March.

He addressed a series of other social challenges including the low birth rate, poverty among the elderly, the high suicide rate and industrial fatalities, as well as the issue of concentration of the population in the Seoul metropolitan area.

Moon put less emphasis on Korean Peninsula issues compared to National Assembly speeches in previous years and said only, "I will do my best to create a new order for peace and prosperity on the Korean Peninsula through dialogue and diplomacy.”

He said that next year’s budget will be in effect for the government that succeeds his, and asked the parliament for bipartisan cooperation.

Moon’s parliamentary address earned 16 rounds of applause from the ruling Democratic Party (DP), and DP lawmakers gave him a standing ovation at the end of the speech.