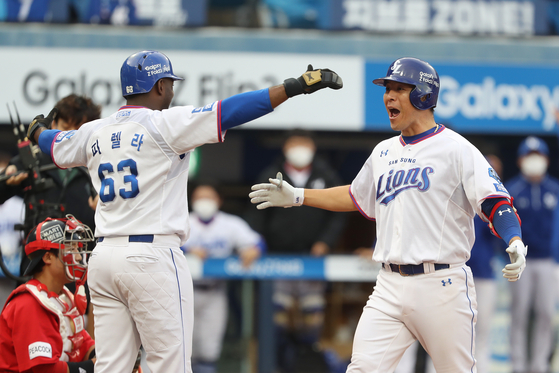 
The race to the top of the KBO has become even more competitive as the league enters its final week, with the slumping KT Wiz losing the top spot for the first time since Aug. 12.

Instead, the Samsung Lions have now taken a sole lead at the top of the table, edging out the Wiz by 0.5 games after sweeping the Suwon club on Friday and Saturday.

The LG Twins remain in third, three games behind the Lions but still within striking distance of first place.

But the Lions lead is especially tenuous as the Daegu club only has three games left to play on the season, on Wednesday, Friday and Saturday. The Wiz still have five games, with a double-header on Thursday, and, as of press time, the Twins have six, including an unusually scheduled game on Monday evening.

The story gets even more difficult to predict when you look at who the top teams are set to face. While the Lions may have a disadvantage in terms of the number of games left to play, two of those games are against the NC Dinos, who they've beaten 10 times already this season.

The Lions are also on by far the best form, having won six of their last 10 games with just three losses, exactly the opposite of KT's three wins and six losses and LG's even worse two wins and five losses.

KT are fairly lucky in that all of their remaining games will be played in the greater Seoul area, with Wednesday and Thursday at home in Suwon, Friday in Gocheok Sky Dome, western Seoul, and Saturday in Incheon. Three of those games are against the Dinos, one of the only teams to have held their own against the Wiz this year with a 6-6 line.

The Twins are less lucky. After playing Monday's game at home, the Twins head to Daejeon on Wednesday and Thursday to face the Hanwha Eagles, then on to Busan on Friday and Saturday to take on the Lotte Giants. Neither of the lower-ranked teams should be a big threat to the Seoul club, but covering such a big difference is likely to wear out the players.

Lower down the table, things are just as unclear. The fourth-place Doosan Bears, fifth-place SSG Landers and joint sixth-place Dinos and Kiwoom Heroes are all within striking distance of each other with just a few games left to play.