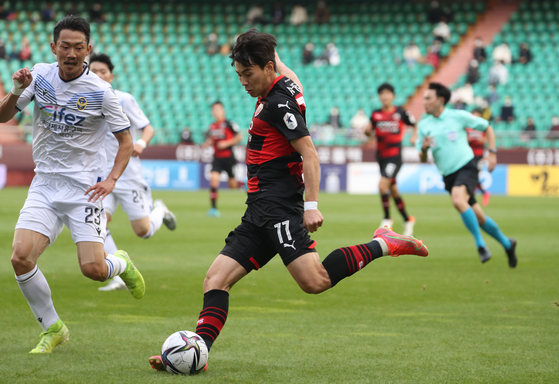 Lim Sang-hyub of the Pohang Steelers tries his shot against Incheon United at Pohang Steel Yard in Pohang, North Gyeongsang on Sunday. [YONHAP]


Jeonbuk Hyundai Motors climbed back to the top of the K league 1 standing alongside Ulsan Hyundai last week as the 12 clubs are divided into two for the final stretch before the 2021 season comes to an end.

All 12 K League 1 clubs have now played 33 matches this season, and have been split into two groups for the final stage of play. The top six teams will now compete for the championship title, while the bottom six will fight to avoid regulation.

Defending champion Jeonbuk made its way back to the top of the table after avoiding a loss for the last five matches to tie with Ulsan on 64 points. Daegu FC, Suwon FC, Jeju United, and Suwon Samsung Bluewings join the two clubs in the top six.


The top six clubs will play a game each against each other to determine who takes the title and qualifies for next year's AFC Champions League.

Among the B teams, the last-place club once the season is finished will be sent straight down to the K League 2, while the second-last club will have to face a K League 2 team in a playoff to determine who plays in the top league next year.

The big showdown between Jeonbuk and Ulsan will likely decide who ends up as champion.

Ulsan will be looking to take the double this season, hoping to clinch both the K league champion title and the FA Cup title.

The FA Cup is not part of the K league season, but is a knockout competition hosted by the Korea Football Association where the winner earns a ticket to the AFC Champions League next season. Ulsan is scheduled to face the Jeonnam Dragons in the FA Cup quarterfinals on Wednesday evening. Last season, Jeonbuk defeated Ulsan 3-2 in the FA Cup final.


The remaining four top clubs — Daegu, Suwon, Jeju and the Bluewings — will compete for third place as the top three teams qualify for the Champions League. Currently, Daegu sits at third with 49 points, but all three teams trail closely behind with 45 points. 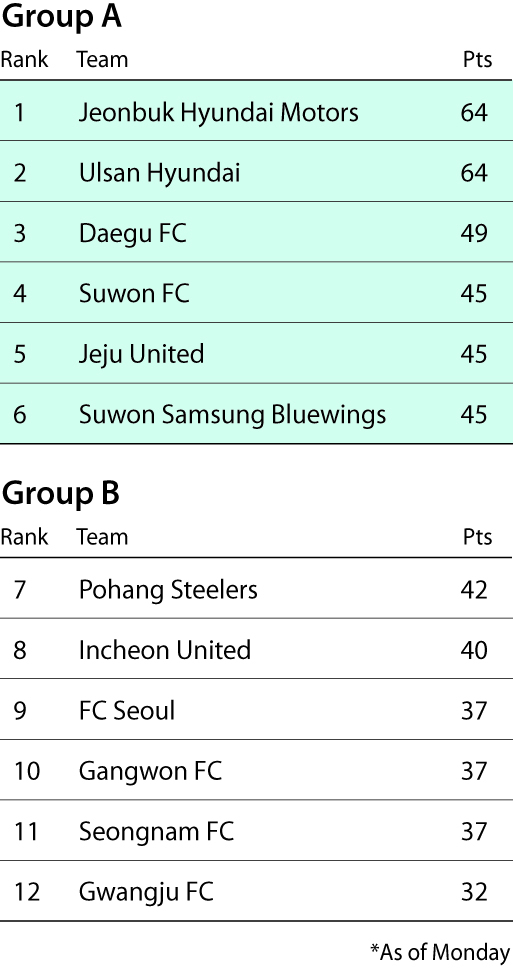 For the bottom six clubs, the competition to avoid relegation is fierce.

Every season, the winner of the K League 2 is promoted to the first division and the second, third and fourth clubs compete in a playoff. The winner of the playoff faces the second-from-last K League 1 club to vie for a seat in the top tier.

Gwangju FC is currently in the guaranteed relegation spot, with Seoul, Gangwon and Seongnam all in relegation playoff contention with 37 points. The Steelers top the second group table with 42 points.

Last year, Jeju United and Suwon FC made it to the first division as the K league 2 champion and runner-up respectively. Busan IPark was relegated as the bottom team in the K league 1 and Gimcheon Sangmu was relegated on a technicality last season after finishing fourth.

The league will announce the final round schedules in the upcoming week with the top three teams in each group playing three of the five final games at home.