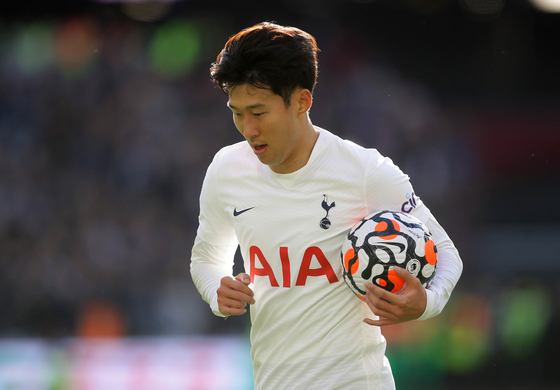 Tottenham Hotspur's Son Heung-min runs with the ball during a game against West Ham at London Stadium in London on Sunday. [REUTERS/YONHAP]


Son Heung-min stayed quiet during Tottenham Hotspur's 1-0 loss to West Ham on Sunday as questions grow over manager Nuno Espirito Santo's utilization of the Korean striker as Harry Kane takes back the top role at the club.

Son appeared to be in an especially favorable position as Kane sidelined himself at the start of the 2021-22 season, leading the attack for the first few games and immediately appearing productive with a goal in the opening match against Manchester City.

The gradual return of his playmaking partner has reduced Son's role a little bit, although it hasn't stopped him from doing damage — Son has scored in two of his last four games, against Arsenal on Sept. 26 and Newcastle on Oct. 17.

Kane also scored in that Newcastle game, his first Premier League goal of the 2021-22 season.

But fans have been quick to call for Son to be given more responsibility again. After Tottenham uploaded a video on Twitter showing Son scoring two free kicks during training last week, commenters were quick to point out that Kane is yet to do any damage from a set piece this season. While some fans call for direct free kicks to be handed over to Son, Kane is likely to keep the role for the foreseeable future.

Neither Son nor Kane impressed against West Ham, with Football.London awarding both players a four out of 10 for their performance.

"Some dogged work from the player midway through the first half to tee up Lucas after not having much of an impact prior to that," the report said of Son. "Got himself into a good position in the second half but the final pass to him was lacking.

"Quiet from the Korean on a day when Spurs needed more."