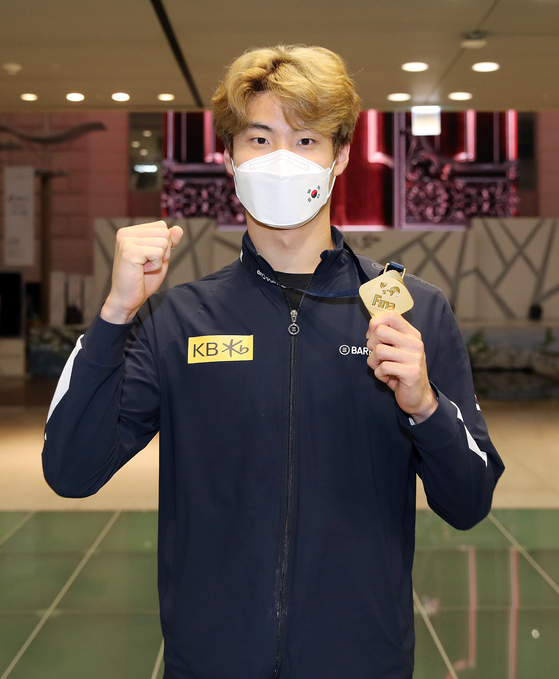 Hwang Sun-woo poses with his first international gold medal at Incheon International Airport on Sunday after returning from the Doha, Qatar leg of the FINA Swimming World Cup 2021. [NEWS1]


Hwang Sun-woo won his first international gold medal ever in the men’s 200-meter race at the FINA Swimming World Cup in Doha, Qatar on Saturday.

Hwang narrowly missed out on breaking Korean swimming star Park Tae-hwan’s Asian record of 1:41:03 that was set at the 2016 World Championships. Park’s record is just 0.14 seconds faster than Hwang’s time on Saturday.

Hwang made a name for himself during the Tokyo Olympics when he shattered two Korean records and an Asian record, becoming the first Korean swimmer since Park to reach a final at the Games. Not only did Hwang reach the finals, he finished fifth in the 100-meter freestyle final, the best finish by an Asian swimmer since 1952.

The swimming lanes at the Doha World Cup were 25 meters, only half the length of the official Olympic swimming lanes. Hwang and the other swimmers had to swim eight laps of 25 meters for the 200-meter race, turning twice the number they would have during an Olympic race. It was the first time that Hwang swam in a 25-meter lane for a tournament.

In addition to the shorter lanes, Hwang was facing the junior record holder Sates, who topped the heat stage while Hwang came in third, 1.14 seconds behind of Sates.

In the final, Hwang and Sates swam in lane three and four respectively. Sates took the lead from the start and held on until the seventh turn. Hwang made a big comeback in the last few seconds of the last lap to win his first international gold.