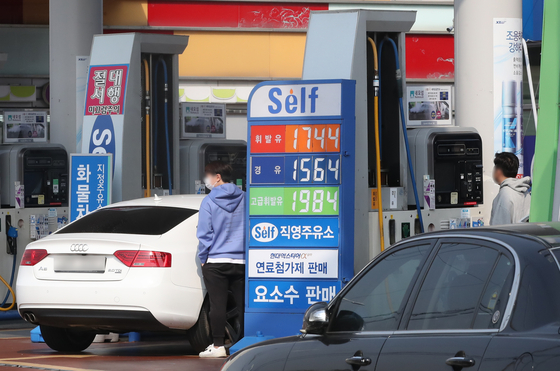 A customer filling up at a gas station in Seoul on Tuesday. Starting Dec. 12 fuel prices will be cut as the government decided to lower 20 percent on fuel taxes. [YONHAP]

Fuel taxes are being cut 20 percent until the end of April.

This is a bigger break than the last time international oil prices spiked -- in 2018 and 2019 -- when they were cut 15 percent. In fact, it is the sharpest cut in fuel taxes ever.

After the tax cut, gasoline will be 164 won cheaper per liter, diesel 116 won and LPG butane 40 won.

The total amount of taxes on a liter of gasoline is 820 won (70 cents), which includes transportation and education taxes as well as a 10 percent value-added tax.

The average price of gasoline nationwide on Tuesday was 1,762 won per liter, and 1,838 won in Seoul.

In the last year, the gasoline price has risen roughly 30 percent.

The fuel tax cut is expected to cost the government 2.5 trillion won in revenues over six months.

A car owner driving 40 kilometers a day will likely save about 20,000 won a month.

Between November 2018 and May 2019, the government cut fuel taxes 15 percent as international oil prices spiked above $80 per barrel.

Korea's consumer prices have risen more than 2 percent for each of the last six months.

The price of manufactured goods rose 3.4 percent in September, the sharpest increase since May 2012, when they increased 3.5 percent.


“The world commonly is facing global inflationary pressure with the U.S. and Europe in September recording the biggest consumer price increases of 5.4 percent and 3.4 percent since 2008,” Finance Minister Hong Nam-ki said at the meeting with DP lawmakers.

He said while the International Monetary Fund (IMF) said in its World Economic Outlook report that current inflation is temporary and likely to recede next year, the Korean government is worried about its impact on average Koreans.

Last week, Minister of Trade, Industry and Energy Moon Sung-wook said the international consensus about crude prices was that they will stabilize in the first half of 2022.