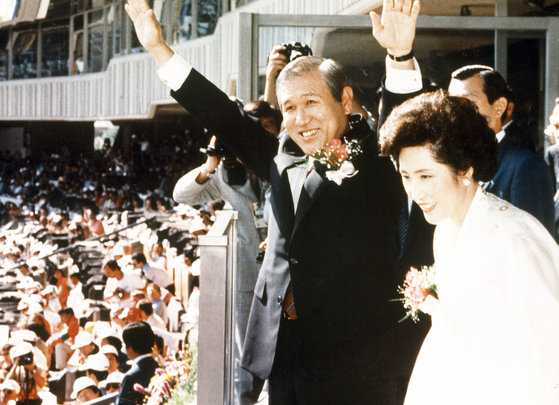 Former President Roh Tae-woo, who died on Tuesday at the age of 88, is shown in this file photo at the opening ceremony for the Seoul Summer Olympic Games in 1988. [YONHAP]


Former President Roh Tae-woo, who gave in to nationwide street protests in 1987 to allow direct presidential elections and began normalizing relations with socialist countries, passed away on Tuesday, according to his aides.

Roh, who served as the 13th president of the Republic of Korea from 1988 to 1993, suffered from ill health in recent years due to an unspecified chronic condition and was recently admitted to Seoul National University Hospital as his health deteriorated.

Born in Daegu in December 1932, Roh became friends in high school with a fellow student, Chun Doo Hwan, who later became the country's 12th president through a military coup d'etat.

Following the outbreak of the Korean War in 1950, Roh joined the Army and later attended the Korean Military Academy with Chun, and they both graduated in 1955. Roh rose steadily through the ranks thereafter, becoming a general by 1979.

In December 1979, two months after President Park Chung-hee was assassinated, Chun and fellow officers launched a military coup. Roh, an army division commander, gave them crucial support enabling them to take control of the government of President Choi Kyu-hah, who succeeded Park.

After Chun declared martial law in May 1980, Roh was a member of the junta that ordered the brutal suppression of demonstrators in Gwangju that month, which resulted in the deaths of at least 165 civilians.


After Choi resigned and Chun took the presidency, Roh resigned from the military and served in a series of ministerial positions in Chun's administration and as a member of the 12th National Assembly.

Chun and Roh enjoyed a close relationship through the years, and Chun selected Roh to become the new chairman of his ruling political party, the Democratic Justice Party (DJP), in 1985. However Chun's announcement in June 1987 that Roh would be the party's candidate in upcoming presidential elections proved to be a tipping point that sparked widespread popular unrest, which became known as the June Struggle.

Faced with pro-democracy rallies across the country and unrest before the Summer Olympics, due to be held in Seoul the next year, Roh accepted protesters' demands for direct presidential elections. In a historic speech on June 29, 1987, he proposed a raft of democratic reforms, which led to the drafting of a new constitution, which remains in place today. Chief among its provisions was the direct election of the president by popular vote.

In the December 1987 election, Roh was elected president through a direct vote after the opposition vote was split between the candidacies of Kim Dae-jung and Kim Young-sam. He began his five-year term as president on February 25, 1988.

As president, Roh announced "an era of ordinary people" had arrived in Korea, and de-emphasized the central role of the military in the country while pursuing a democratization of politics. Although Roh's reforms led to the loss of the ruling DJP's majority the National Assembly in the April 1988 general election, the party merged with two moderate opposition parties to form a new majority party called the Democratic Liberal Party.

In foreign affairs, Roh charted a new course of engagement of the socialist bloc by engaging in a policy of "Nordpolitik," building ties with socialist states that were North Korea's closest allies, China and the Soviet Union. South Korea established diplomatic relations with the Soviet Union in 1990 and China in 1992, and also signed a nonaggression agreement with the North in 1991.

Partially as a result of his diplomacy, the Soviet Union dropped its opposition to South Korean membership in the United Nations, and both Koreas were simultaneously admitted to the body in 1991.

Roh was succeeded as president in February 1993 by Kim Young-Sam, whose anti-corruption agenda targeted both Roh and Chun. Roh publicly apologized in October 1995 for having illegally amassed hundreds of millions of dollars in secret political donations during his term as president. 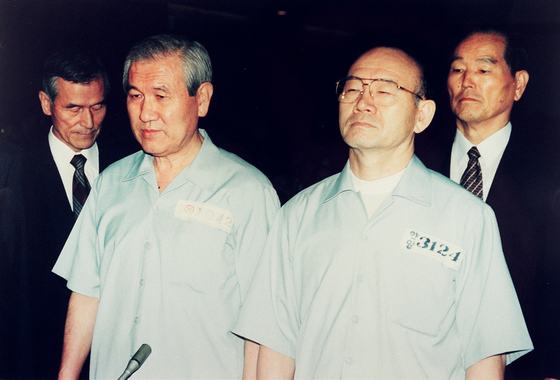 Former presidents Roh Tae-woo, left, and Chun Doo Hwan appear in court on Dec. 12, 1996 to hear the verdict on the charges against them for their role in the suppression of the Gwangju pro-democracy uprising. [YONHAP]

In 1996, three years after leaving the presidency, Roh was convicted alongside Chun for corruption, mutiny for their role in the 1979 military coup and for murder in the brutal crackdown on the Gwangju pro-democracy uprising.

Although Roh was sentenced to 17 years in prison and faced around 260 billion won ($223 million) in fines, he was pardoned in 1997 by outgoing President Kim Young-sam and President-elect Kim Dae-jung.