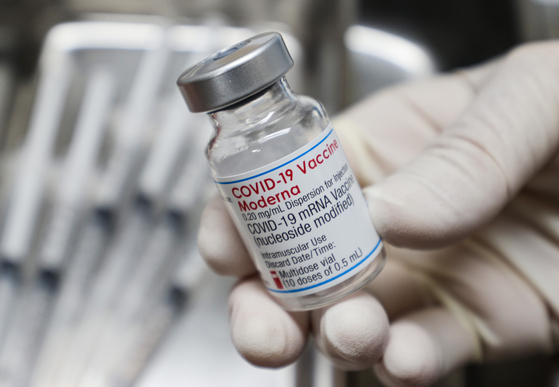 
Around 2.4 million doses of Moderna’s Covid-19 vaccine packaged locally by the Korean drugmaker Samsung Biologics are to be used in Korea.

This is the first time a Moderna batch that was locally bottled will be used in the country.

“A total of 2,435,000 doses of Moderna’s vaccine bottled by Samsung Biologics will be introduced in Korea this week,” said Ryu Geun-hyeok, a second vice minister of the Ministry of Health and Welfare, during a briefing Tuesday.

“Following President Moon Jae-in’s trip to the United States for the Korea-U.S. summit in May, Samsung Biologics and Moderna signed a deal for [packaging] in the presence of the president,” Ryu noted. “The government and Moderna have continuously held discussions [...] on the need for domestic supply of locally produced vaccines.”

Samsung Biologics, the biotech arm of Samsung Group, signed a contract manufacturing agreement with Cambridge, Massachusetts-based Moderna to do “fill-finish” manufacturing of its mRNA Covid-19 vaccine. The vaccine substances arrive in bulk from overseas and Samsung Biologics does the packaging. In August, Samsung started pilot production.

The 2.4 million doses are part of a 40 million dose contract between Moderna and the government.

“We have agreed to distribute the first batch locally and will continue talks with Moderna for future supplies,” said Jung Eun-young, head of the country’s vaccine introduction task force.

This is the second time that a Covid-19 vaccine produced in Korea is to be used at home following SK Bioscience’s manufacturing of the AstraZeneca vaccine, which has been used since February.

The local distribution of Moderna's batch packaged by Samsung was advanced by four months, according to industry sources.

In order to ship a vaccine, it must undergo many stages of manufacturing, quality control and approvals. For Moderna’s vaccine, there was a robust partnership among government agencies, Samsung and Moderna.

Vaccines based on mRNA have stringent temperature rules as they can easily be destroyed by heat. In order to defrost and prepare the raw material, a system for bottling in complete asepsis and an automated inspection for foreign materials must be established. The complete procedure from manufacturing to fill-and-finish stages must be carried out without interruption, and the vaccine must be stored at minus 20 degrees Celsius immediately after production.

The drug safety ministry, on the other hand, formed a dedicated task force for the early supply of vaccines and carried out licensing procedures and shipment inspections at the same time. It also assigned additional manpower to issue a Good Manufacturing Practice (GMP) certification. Those efforts significantly sped up the process, and on Monday, the ministry granted GMP certification to Samsung Biologics and gave emergency approval for the use of the vaccines.

“This is an achievement born out of cooperation between the public and private sectors so the public can get vaccines produced here,” Ryu said. “It will serve as an opportunity for Korea to establish itself as a vaccine hub that contributes to the global supply of vaccines while laying the foundation for stable vaccine production in Korea.”

The Moderna doses will be used for new inoculations in the fourth quarter, second shots and booster shots.

With Korea now having an adequate supply for its vaccination campaign, the government expects to soon reach its next vaccination target: 80 percent of the country’s population.

“As of Monday, the fully-vaccinated population exceeded 36 million and reached 70.9 percent,” Ryu said. “The percentage of people who received one dose is at 79.5 percent, so [the 80 percent milestone] is not impossible to achieve, and is essential to push for a safe return to normalcy.”

He also stressed that high participation in vaccinations led to a decrease in new infections.

On Tuesday, Korea reported 1,266 new Covid-19 cases, of which all but 20 were locally transmitted.

“Both the greater Seoul area and other parts of the country are maintaining a stable decline [in infections],” Ryu added. “The number of patients has been on a decline for three consecutive weeks, down 46 percent from the fifth week of September, when cases recorded the highest level.”