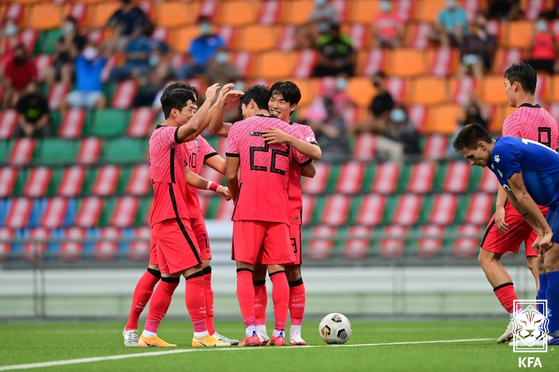 The Korean U-23 football team celebrate after scoring a goal against the Philippines at Jalan Besar Stadium in Singapore on Monday. [NEWS1]


The Korean U-23 football team beat the Philippines 3-0 on Monday in the first qualifier for the 2022 AFC U-23 Asian Cup.


Korea, the reigning U-23 Asian Cup champions, got off to a slow start at Jalan Besar Stadium in Singapore on Monday, failing to get anything across in the first half.

That quickly changed after the break, with Lee Kyu-hyuk scoring the young Taeguk Warriors' first goal in the 51st minute, followed quickly by Ko Jae-hyeon in the 72nd minute and Park Jeong-in in the 89th minute.

The win gives Korea three points to top qualifying Group H, above Singapore and Timor-Leste, who drew 2-2 on Monday to take one point each. The Philippines rounds off the group with no points. The top team in each of the 11 groups and four runners up will advance to the 16-team Asian Cup, alongside host Uzbekistan.

Korea has finished within the top four at every single AFC U-23 Asian Cup since the tournament was founded in 2013. That year, Korea finished fourth after losing to Jordan on penalties in the third-place playoff.

In 2016, Korea lost 3-2 to Japan in the final to finish in second place, before again slipping back to fourth in 2018 when they dropped the third-place playoff to Qatar, 1-0.

In 2020, Korea shot through the entire tournament without dropping a single game, beating Saudi Arabia 1-0 in the final to take the Asian Cup.

The U-23 team enter this year's qualifications after an unusually busy year with the 2020 Tokyo Olympics this summer.

Korea had an ultimately disappointing Olympics, dropping what was expected to be an easy opening game to New Zealand, before going on to beat Romania and Honduras to earn a spot in the quarterfinals, only to be immediately knocked out by Mexico.

Despite the difficult Olympic results, Korea's overall performance in 2021 has been positive, with a total of five wins, three losses and a draw to date.

The U-23 team will next face Timor-Leste on Thursday.

The Philippines offers variety of camping options for post-Covid times