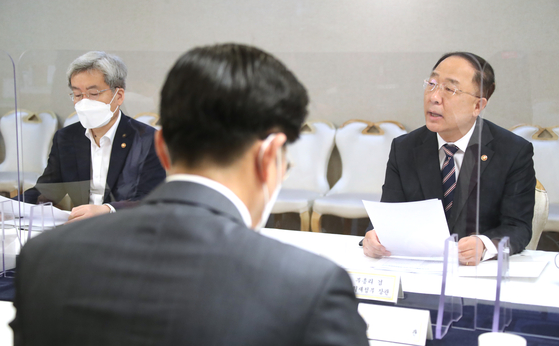 Finance Minister Hong Nam-ki, rigt, during a meeting on real estate at the government complex in Seoul on Wednesday. [YONHAP]

Finance Minister Hong Nam-ki said the government will look into the regulations to see if it can recoup excessive profits private developers pocket from real estate development projects.

“We will be closely looking into related regulations to see if there are areas that need improvement,” Hong said Wednesday.

He was responding to an explosive scandal over an asset management company, Hwacheon Daeyu, that earned outsized profits in a provincial government-backed development project in Daejang-dong, Gyeonggi.

The project was spearheaded by a top official at the Seongnam Development Corp., Yoo Dong-gyu, known to be close to the ruling Democratic Party’s presidential candidate Lee Jae-myung.

Lee was Seongnam’s mayor when the project was approved.

“We [the government] will take steps so that related measures could be made either in November or in December,” Hong said.

Since the Daejang-dong development scandal broke, there has been talk in political circles about tightening regulations to allow the government to collect a bigger share of the profits generated from major development projects.

One of the proposal pushed by the Democratic Party (DP) is reforming the 1989 Restitution of Development Gain Act by raising the ratio of profits local governments can take from the current 20 to 25 percent to 50 percent.

The purpose of the act is to use profits generated from real estate development to fund public infrastructure projects.

The government on Wednesday also decided to cut 1,064 employees of the Land and Housing Corp. (LH) and reorganize 24 non-essential departments of the state-owned developer.

In June, the government announced a restructuring of LH, including the laying off of 20 percent of its employees, after several employees were accused of using inside information about development plans to make money.

That scandal cost the ruling DP to lose mayoral by-elections in Seoul and Busan in April.

The departments that will be wound up include safety inspection, project financing, U.S. military base relocations as well as major energy projects.

Some departments including public land surveys will be transferred to other government institutions like the Land Ministry.

“Since the announcement [of real estate profiteering prevention measures in March], we have recommended prosecutions of 2,909 people,” Hong said.

He said agencies from the Land Ministry to the police and tax authorities are investigating illegal profiteering or the dodging of taxes on real estate.

Among the 2,909 people that were recommended for prosecution or investigation, 59 have been arrested. Some 198.3 billion won of dodged taxes were recovered and related fines and confiscations totaled 138.5 billion won.