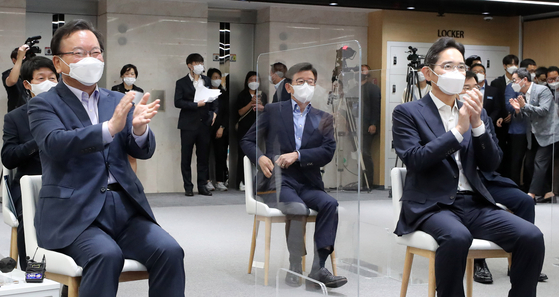 
Samsung Electronics Vice Chairman Lee Jae-yong presented a vision of a “New Samsung” on the first anniversary of the death of his father, Lee Kun-hee.

The 53 year-old Lee was out of the public eye for a lengthy period due to legal troubles and a time in jail for bribing former President Park Geun-hye. Since an August parole, however, he has gradually come out of the shadows.

“With a humble mind, we should go forward to build ‘a New Samsung’ and a better future for neighbors and society at-large,” Lee said in a statement released by the tech giant Monday.

The short remarks didn't specify how the “New Samsung” would be manifested, but symbolically showed that Lee is back at the helm.

For the past three months, Lee’s activities were centered around investment, job creation and vaccine production support for Samsung Biologics, a biotech affiliate, according to sources at Samsung Electronics and industry insiders.

One of Lee’s first tasks out of prison was to coordinate Samsung affiliates to expedite the distribution of Moderna’s vaccine in Korea, in what is described as a key factor in helping Samsung Biologics package the vaccines earlier than planned.

Around 2.4 million doses of Moderna’s Covid-19 vaccine packaged locally by Samsung Biologics are to be distributed in Korea as early as this week. This is the first time a Moderna batch that was locally bottled will be used in the country.

“Lee directed the establishment of a task force devoted to managing the large-scale vaccine packaging, bringing together executives at Samsung Biologics, Samsung Bioepis and Samsung Electronics,” said a source with knowledge of the matter.

Lee did his own contacting of high-ranking executives at Moderna, an outreach that led to the contract manufacturing organization (CMO) services contract with the U.S. drug maker, the source added.

Lee dispatched a group of manufacturing specialists from Samsung Electronics to the bio affiliate in an effort to improve the yield rate of the vaccine production.

Only two weeks after Lee’s parole, Samsung Electronics announced an investment plan of 240 trillion won ($205.2 billion) over three years in its most important businesses for the future including chips, telecommunications, biopharmaceuticals, artificial intelligence and quantum computing. The amount was 33.3 percent higher than a three-year investment plan announced in 2018, reflecting the tech company’s ambitions.


With the investment, the Suwon, Gyeonggi-based company vowed to hire at least 40,000 new employees.

A source at the electronics maker confirmed that Lee spearheaded the three-year plan after being paroled.
“The completion of the three-year investment was one of the most urgent matters, since the previous one was due to end this year,” said a source at Samsung Electronics who spoke on the condition of anonymity.

Following the announcement, Lee pledged to create a further 30,000 jobs over three years last month in his first public appearance since his parole.

The plan was announced during a meeting with Prime Minister Kim Boo-kyum and other politicians. The jobs announced will be created through Samsung's joint social responsibility programs with the government.

How much to investment is only one item on a long list of decisions facing the company.

Samsung Electronics has not determined the location for its planned $17 billion investment in the United States to build a new chip-making plant. The city of Taylor, Texas, is the latest place in which it filed an application for tax benefits.

Samsung Electronics Vice Chairman Kim Ki-nam, who heads the semiconductor business, told reporters on Tuesday that the decision will be made “as soon as possible.”

The company has not made a big merger or acquisition in a while. But a new deal is expected since Samsung Electronics promised to carry out “mergers and acquisitions of meaningful size in three years” during a conference call in July.

Industry insiders suspect the targets will be foundry chipmakers, robotics companies and artificial intelligence, the sectors that are critical for future technologies and where Samsung has room for improvement compared to big tech companies in the U.S.

In the meantime, Lee must show he's a reformed man and isn't at risk of falling into another bribery scandal that led to the leadership vacuum.

“Lee is tasked with meeting higher social expectations now than in the past when his father ran business,” said Lee Kyung-mook, a professor at Seoul National University’s business school.