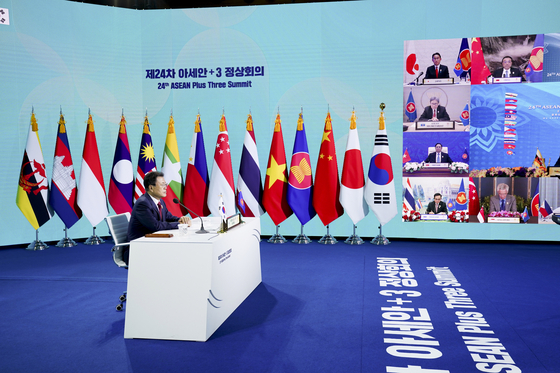 
Korean President Moon Jae-in urged an "inclusive recovery" from the Covid-19 pandemic, especially stressing health and climate change cooperation with Southeast Asia, in a virtual summit with the leaders of Asean countries, China and Japan Wednesday.

Moon took part in the 24th Asean Plus Three summit along with new Japanese Prime Minister Fumio Kishida and Chinese Premier Li Keqiang. He discussed their achievements, including their response to the Covid-19 crisis and cooperation toward a more sustainable future, and also exchanged views on the situation on the Korean Peninsula, said the Blue House in a statement.

Moon said that Korea, as one of the global vaccine production hubs, "is putting utmost efforts into the equitable and swift distribution of vaccines."

Amid the Covid-19 situation, Moon noted that Asean, South Korea, China and Japan "cooperated quickly and efficiently" by introducing the Asean Response Fund and providing a stockpile of essential medical supplies.

Asean leaders in turn expressed thanks for Korea's support in the health and medical fields, said the Blue House. Korea provided $5 million this year to the Asean Response Fund for Covid-19, in addition to $1 million last year. Korea has also separately pledged $200 million to Covax, the World Health Organization (WHO)'s vaccine-sharing mechanism, this month.

Korea is expanding its official development assistance (ODA) and humanitarian aid in areas such as support in infectious diseases response, sharing K-quarantine experiences and strengthening the health care system. Moon especially called to expand ODA to focus on the climate, digital and health sectors and work together to transform Asean's digital economy and respond to the climate crisis.

Korea is also striving toward sustainable growth in the region through carrying out its New Southern Policy Plus mechanism, an upgraded policy toward Southeast Asia to further expand cooperation in public health infrastructure, revamping supply chains and jointly strengthening the East Asian regional architecture.

He said that promoting free trade and multilateralism is the way to restore global supply chain connectivity, said the Blue House. He added that the Korea-Asean FTA and bilateral FTAs with Southeast Asian countries will serve as a solid foundation for trade and investment.

He also urged for the swift implementation of the Regional Comprehensive Economic Partnership, or RCEP, a multilateral trade pact signed by Korea, China, Japan, Australia, New Zealand and the Asean countries in November last year.

Moon said that the Korean New Deal, policies on a transition to a digital and green economy and a strengthening of social safety nets, has created "a new leap forward for sustainable development domestically." Korea, he said, would like to contribute to the "inclusive and sustainable growth" of Asean by sharing such experiences.

The Asean Plus Three summit, created in 1997, brings together the leaders of South Korea, China and Japan along with the 10 Asean members.

Moon briefly "welcomed" Kishida at the start of the Asean meeting, their first encounter since his inauguration as Japan's new prime minister earlier this month.

The 10 Asean countries are: Brunei, Cambodia, Indonesia, Laos, Malaysia, Myanmar, the Philippines, Singapore, Thailand and Vietnam. However, Myanmar was barred from the summits by the other Asean countries.

The Asean meetings come a day ahead of Moon's departure for a nine-day trip to Europe for a series of multilateral conferences including the G-20 summit in Rome and COP26 in Glasgow, Scotland.

Kishida said he will take part in United Nations Climate Change Conference, or COP26, scheduled for Nov. 1 to 2, leading to speculation on whether Moon and the new Japanese leader will have any face-to-face meetings.