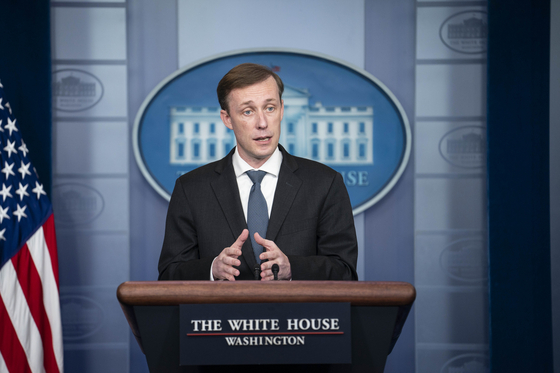 
While the United States and South Korea are aligned on the need to diplomatically engage North Korea, they may differ on the steps needed to be taken, the U.S. top security adviser said Tuesday.

Seoul has been pushing for a formal declaration to end the 1950-53 Korean War as a means of encouraging Pyongyang to return to dialogue, an issue that has been discussed in a series of talks between the South Korean and U.S. nuclear envoys in the past week.

“We may have somewhat different perspectives on the precise sequence or timing or conditions for different steps,” said U.S. National Security Adviser Jake Sullivan in a briefing at the White House.

Sullivan had been asked by a reporter how seriously Washington is considering Seoul's proposal for an end-of-war declaration as a catalyst to restart nuclear talks.

He added, “But we are fundamentally aligned on the core strategic initiative here and on the belief that only through diplomacy are we going to really, truly be able to effectively make progress and that that diplomacy has to be effectively paired with deterrence.”

Sullivan’s remarks were the first public reaction by a high-ranking White House official on Seoul’s proposal for an end-of-war declaration.

On Sunday, Sung Kim, the U.S. special representative for North Korea, said after talks with his South Korean counterpart that he looks forward to continuing to work with South Korea to “explore different ideas and initiatives,” including Seoul’s end-of-war proposal. He also expressed support for humanitarian cooperation with the North.

Kim’s visit to Seoul last weekend for talks with South Korean top nuclear envoy Noh Kyu-duk came days after their bilateral talks in Washington on Oct. 18, followed by a trilateral meeting with their Japanese counterpart the next day. The back-to-back talks led to anticipation that the two sides made some headway in the discussions, but Kim’s remarks in Seoul did not reveal much.

Sullivan said in the Tuesday briefing, “I do not want to go too far publicly in terms of our intensive discussions with the Republic of Korea government,” but described Kim’s recent discussions as having been “very productive, constructive.”

He added that Washington will “continue the intensive conversations.”

While Seoul officials have pushed an end-of-war declaration as a “confidence-building” measure to engage Pyongyang, Washington had not given a clear stance on the issue.

Sequencing, or who takes the first step and the order of events, is at the core of the denuclearization negotiations, an issue that constantly came up when diplomatic engagement with Pyongyang kicked off in 2018 with a series of inter-Korean and North-U.S. summit talks. Negotiations have been at a standstill since 2019, as the North and the United States couldn’t agree on what measures toward denuclearization Pyongyang would need to take in order for sanctions relief.

The timing, or when to make an end-of-war declaration, is a very tricky factor considering that the Moon Jae-in administration ends its five-year term next May. It has seen the Beijing Winter Olympics in February as an opportunity to revive dialogue.

The third factor, conditions, involves what will be given in return for such a declaration, something Pyongyang and Washington may not see eye-to-eye on.

The Joe Biden administration has repeatedly offered dialogue “without conditions” to North Korea, which has remained unresponsive so far and, in turn, has been demanding the United States end its “hostile policy” and "double standards," references to sanctions and joint military exercises with the South.

Sung Kim said on Oct. 18, "Even as we remain open to dialogue, we also have a responsibility to implement the UN Security Council resolutions,” stressing U.S. commitment to enforcing sanctions on the North meant to curb its nuclear and ballistic missiles programs.

A Seoul Foreign Ministry official said on Sullivan’s remarks Wednesday, “We will continue serious and in-depth consultations with the United States on an end-of-war declaration in the future."

In an address to the United Nations General Assembly in New York last month, President Moon proposed that the two Koreas, the United States, and possibly China formally declare an end to the Korean War, which ended with an armistice agreement rather than a peace treaty.

Suh Hoon, director of the Blue National Security Office, said in a parliamentary audit Tuesday, “It is difficult to make a prediction because of many uncertainties,” addressing the possibility of another inter-Korean summit before the end of Moon’s term. He pointed out that inter-Korean communication lines have been restored only recently.

Pyongyang, along with protesting the Seoul-Washington joint drills, has called for the removal of U.S. troops on the Korean Peninsula, and some experts have been concerned about the legal ramifications of an end-of-war declaration, and whether it would undermine the grounds for the stationing of American forces here.

Ahn Eun-joo, a deputy spokesperson for Seoul’s Foreign Ministry, said in a briefing Tuesday said that an end-of-war declaration is a “political and symbolic measure to build trust” and “does not mean a legal or structural change in the current armistice system.”