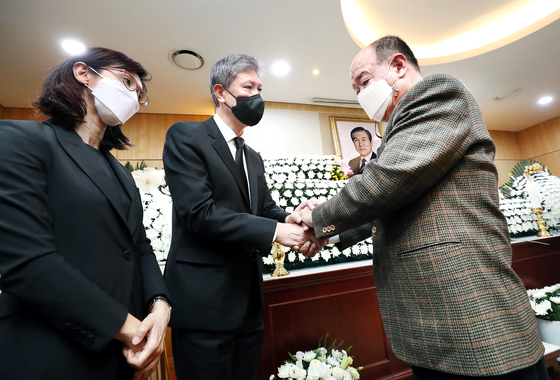 
Former president Roh Tae-woo asked in his will for forgiveness from victims of the military junta's brutal 1980 suppression of the Gwangju pro-democracy protests, as the government announced Wednesday it would hold a state funeral for him.

In the will, made public by his son, lawyer Roh Jae-hyun, the former president said, "I tried my best, but I ask for forgiveness for my shortcomings and grave mistakes."

Roh was an important figure in Chun's military coterie, which ordered the Army to massacre pro-democracy protesters in Gwangju in May 1980, an episode which left at least 165 people dead, according to government estimates.

The junta's brutal suppression of the Gwangju movement shocked the world and remains a cause célèbre among Korean progressives.

Former president Roh also said in his will that he "accepted the fate handed to [him]," and that he was "grateful to have been able to serve the Republic of Korea and its people."

Speaking to reporters near his father's funerary altar at Seoul National Hospital, Roh Jae-hyun said that while it was unfortunate that the late former president was unable to publicly express his feelings on his role in Korea's modern history during his long illness, his will summarized what he told his family while he was still alive.

"From time to time, he expressed his sorrow and his sense of responsibility over the Gwangju incident, but he was bedridden for almost ten years. It is unfortunate he was unable to communicate directly [to the people] on the subject."

Roh expressed regret that his father was unable to fulfill his desire to make amends due to the criminal prosecutions he faced with regards to the Gwangju massacre.

"He said that he hoped to take the darkness of history with him, and that future generations would be able to live with hope," Roh said.

The announcement of Roh's will asking for forgiveness came as Prime Minister Kim Boo-kyum said Wednesday the government will hold a state funeral for him.

Kim made the decision public during a Cabinet meeting, saying that Roh made significant contributions to the country as its 13th president.

"Along with other Cabinet members, I express deep condolences on the passing of former president Roh Tae-woo and offer my sympathy to his family members," Kim said.

"The government will organize a state funeral with respect so that people can pay tribute to his contributions."

Kim, who will head the state funeral committee, is scheduled to visit Roh's funerary altar on Wednesday along with other Cabinet members.

President Moon Jae-in expressed similar sentiments on the former president's passing, saying Roh committed "grave errors" by participating in the 1979 coup d'état and the suppression of the Gwangju pro-democracy protests.

Moon added that Roh also had "accomplishments," such as the successful hosting of the 1988 Summer Olympics in Seoul and pursuing Nordpolitik, building ties with socialist states, and the signing of the 1991 Inter-Korean Basic Agreement that renounced armed aggression and pledged exchanges and cooperation with North Korea.

However, the Blue House said that Moon will not be paying his respects to the former president at his funerary altar.

Roh's funerary altar on Wednesday attracted a stream of politicians, citizens, and critics from both sides of the political aisle.

One of the first politicians to offer condolences was Kim Chong-in, former interim leader of the main opposition People Power Party (PPP), who served as health minister and chief secretary for the economy in Roh's administration.

The visitors also included ruling party figures who opposed the military junta and forged their political careers in opposition to the political and economic legacy of the country's military dictatorship.

One visitor to Roh's funerary altar was Park Nam-seon, who participated in the 1980 Gwangju protests and ran the situation room in the South Jeolla provincial government office after its takeover by democracy activists.

The announcement of a state funeral for Roh, which the interior ministry said would run for five days through Saturday, was not without its critics.

Some DP lawmakers voiced opposition to the state funeral, citing Roh's role in the military coup.

"Holding a state funeral for one of the main mutineers would constitute a denial [of the legitimacy] of the republic," said Oh Gi-hyoung, a DP lawmaker, in a Facebook post.

While the former president's family and the state funeral committee are discussing Roh's burial site, Roh's son told reporters that his father wished to be buried on Unification Hill in Paju, Gyeonggi, north of Seoul, as part of his desire to see the two Koreas reunified someday.

That wish would spare the government from deliberating whether to inter Roh in Seoul National Cemetery in Dongjak district, southern Seoul, where past presidents are customarily, but not always, laid to rest.

Roh's presidential successors Kim Young-sam and Kim Dae-jung are both buried at the national cemetery.