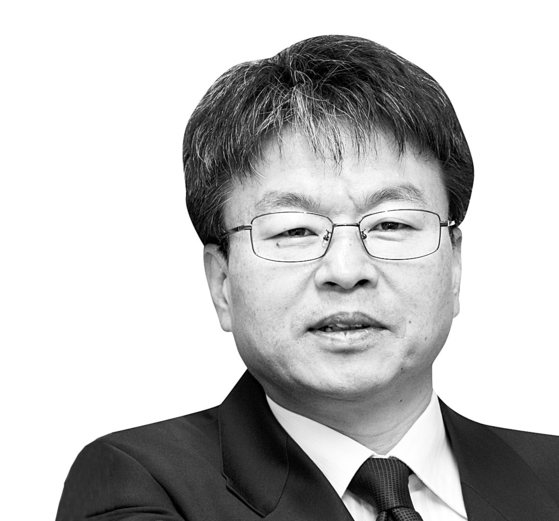 Lee Chul-ho
The author is a columnist for the JoongAng Ilbo.

The owners of Cheonhwa Dongin No. 1 to No. 7 units of Hwacheon Daegyu, an asset management company, have reaped incredible returns of 110,000 percent from their investment in the Daejang-dong development project in Seongnam City, Gyeonggi. Another extraordinary feature was that they are all people from reputable professions like a lawyer, accountant and journalist.

Those in an elite social class were lured into the development project because it offered money. Real estate became a goldmine during the four years of Moon Jae-in’s presidency. Even top industries cannot match the profits seen in real estate. Last year, Samsung Electronics and SK Hynix earned a combined operating income of 41 trillion won ($35 billion) while privately-owned land inflated by 772 trillion won, which exceeds our annual exports of 585 trillion won. Real estate has come to overwhelm industry revenues. The Daejang-dong project attracted former justices, a former special prosecutor, a senior presidential secretary and an incumbent lawmaker.

Ruling Democratic Party (DP) presidential candidate Lee Jae-myung refers to Kang Nam-hoon, an economics professor at Hanshin University, as his mentor on “basic income.” Kang is close to Prime Minister Kim Boo-kyum as they went to the same high school. They entered Seoul National University though their majors differed. They spent their university days sharing a shabby room in Seoul. They kept to the same progressive path. Kim Tae-dong, the policy adviser in Lee’s campaign, also stands out from his policy platform book. Kim, a former senior secretary on economic affairs to President Roh Moo-hyun, is the brother of Kim Heon-dong, head of the real estate reform program of the Citizens’ Coalition for Economic Justice (CCEJ), which has been critical of the Moon Jae-in administration’s real estate policy.

Last month, Kang and Kim ratcheted up their criticism of the real estate policy under the Moon administration. In a recent contribution to an internet media outlet, Prof. Kang attacked the government’s real estate policy. He cited Bank of Korea data to point out that the 772 trillion won worth of inflation in private-owned land values last year was tantamount to 40 percent of Korea’s GDP. Kang argued that the outsized passive income from real estate ownership has worsened polarization in wealth. In an interview, Kim also attacked the Moon government for turning the country into a “real estate hell” with a policy worse than during the military regime. It is very rare that such harsh words came from within the same political camp.

Lee Jae-myung’s camp has been trying to distance itself from the real estate disaster of the Moon government. Lee attacked his rival Lee Nak-yon for allowing investors in the development project to earn 300 to 400 billion won more because housing prices jumped while Lee was the prime minister. Although he has not specifically mentioned President Moon, Lee Jae-myung more or less attacked his real estate policy.

But the Daejang-dong scandal changed the situation. Lee and Moon are in the same boat now. Lee cannot dare to confront Moon when he stills has command over prosecutorial investigations with an approval rating at 40 percent. The two met at the Blue House on Tuesday. But public anger over the real estate market is at a boiling point. The average price of apartments in Seoul hit 1.22 billion won in September, doubling from 670.8 million won in May 2017 when Moon took office. People without homes and young people are outraged about being deprived of any chance to own a home.

The Blue House said the president was sorry about the real estate debacle. But at the same time, it said housing prices are falling. But the Real Estate Board data can hardly be relied on. Since it is based on the reported transaction prices, it cannot immediately reflect the price volatility and lags behind market prices by one to two months. When the CCEJ claimed in 2020 that the median apartment price in Seoul jumped 52 percent over the last three years, the land minister repeated that the price only increased by 14.2 percent according to the government’s calculation.

Lee Jae-myung is confident of proving his innocence in the Daejang-dong scandal. The prosecution has failed to locate the smartphone the key suspect threw away and only lately raided Seongnam City Hall to collect evidence. An arrest warrant for a key suspect was rejected due to poor reasoning. All these incomprehensible scenes irk the public.

Daejang-dong has become the epicenter of the scandal. Lee shone in his defense against sloppy attacks by opposition lawmakers in the National Assembly. The DP claims an overwhelming win for Lee. But survey shows that 64 percent of the people support an independent counsel investigation of the Daejang-dong case, while 27 percent oppose it. Skepticism is mounting about any prosecutorial investigation. Lee cannot dare to pursue a differing real estate policy to widen his voter base. The dilemma for Lee is deepening.