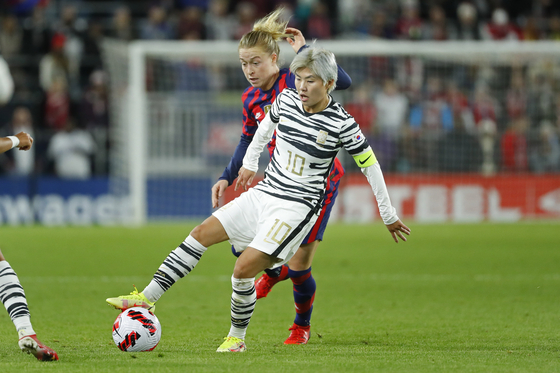 Korean midfielder Ji So-yun keeps the ball away from United States defender Emily Sonnett in the second half of an international friendly at Allianz Field in St. Paul, Minnesota. [USA TODAY/YONHAP]


The Korean women's football team suffered a painful 6-0 loss in the second of two international friendlies against the United States at Allianz Field in St. Paul, Minnesota on Tuesday.

Horan started things off quickly for the United States, scoring in the ninth minute to take an early lead. Korea's defense quickly rallied around, holding the opposition to a 1-0 lead until the very end of the first half, when Cho, the Tottenham Hotspur midfielder and most-capped Korean player, accidentally deflected a U.S. header into the net.

The United States picked up the pace in the second half, with Morgan scoring in the 69th minute, before Rapinoe, Lavelle and Williams all took their chance in the final 10 minutes of the game.

Korea had just one shot on target throughout the match, from Chelsea midfielder Ji So-yun at the start of the second half. The United States, on the other hand, had a huge 29 shots with 13 on target. Korea were only able to see 32 percent of the ball and struggled to capitalize on it, with pass accuracy down below 60 percent.

Korea, ranked at No. 18 in the world, entered the game quietly confident after managing to hold the world-leading United States to a 0-0 draw at Children's Mercy Park in Kansas City, Kansas last week, where Korea's defense and goalkeeper Yoon Young-geul were able to offer a serious obstacle for the U.S. offense.

The United States were always going to present a formidable challenge for Korea. The two sides have now faced each other a total of 15 times, with Korea still unable to enter the win column.

Since their first game in 1997, which ended in a big 7-0 loss, Korea have tied with the United States four times and lost on all other occasions. All 15 matches took place on American soil and Korea have only been able to score five goals to the United States’ 43.

The friendlies against the United States serve as a warmup for Korea ahead of the 2022 Asian Football Confederation Women's Asian Cup in India next January, where the Taeguk Ladies will be looking to earn their third Women's World Cup ticket.