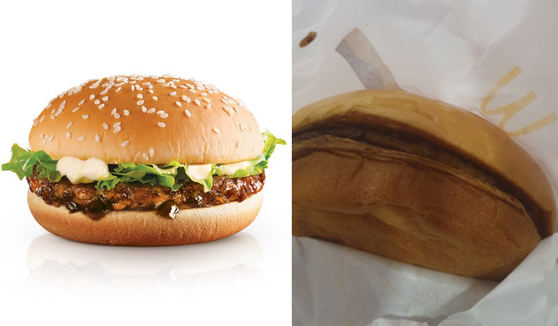 A photo of a bulgogi burger sold at McDonald's, left, and a photo of the same burger served without lettuce due to the supply problem. [JOONGANG ILBO, SCREEN CAPTURE]


Customers are getting lettuce-less hamburgers as vegetable prices soar due to a cold snap, and the situation is expected to continue.

At a discount mart in Seoul on Wednesday, one head of lettuce sold for 9,600 won ($8.20). Prices of other vegetables were no exception.

“The price of lettuce and zucchinis are rising again,” said one 65-year-old woman.

“I’m already worried about kimjang this year,” she said referring to the annual kimchi-making season.

Struggling to cope with expensive vegetables, some fast food joints are offering fare sans salade. McDonald’s Korea announced on Oct. 21 that some hamburgers will not have lettuce on them.

“Please kindly understand that certain products may be served with less or without lettuce due to the unstable lettuce supply caused by the sudden cold wave,” an English-language missive on the company’s website warned.

Customers stiffed leafy-green wise will get a coupon for a free coffee.

“We’re trying our best to fix the problem,” said an official for McDonald’s Korea. “But it’s hard to say exactly when it will be solved.”

The company has specific standards on the quality of food served, and it is hard to find new lettuce suppliers in a crunch. 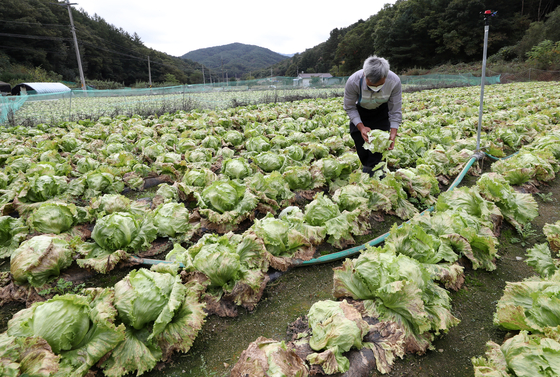 A farmer looks at withered lettuce at a farm in Hoengseong County, Gangwon, on Oct. 14. [YONHAP]


Subway will stop selling salads at “some stores.”

Subs will be offered with lettuce, but customers won’t be able to ask for extra. People ordering 15-centimeter (6 inch) subs will get no more than 21 grams of lettuce, and for 30-centimeter subs 42 grams.

At Burger King and Lotteria, the salad days continue.

“There are difficulties in supplying lettuce due to the cold snap, but we are getting the supplies,” said a spokesperson for Burger King.

Lettuce supply had been decreasing due to an unexpected rainy spell at the end of summer in Gangwon, where many of the vegetables are grown. The recent cold snap has hit farmers hard, cutting lettuce harvests by some 70 percent on year.

A 10-kilogram (22 pound) box of lettuce sold for 40,836 won at the Garak-dong Agricultural & Marine Products Market in Songpa District, southern Seoul, on Wednesday. That’s up 186 percent on year and 10.6 percent from the day before.

The price increase is expected to continue for the time being.

"Prices were on the rise due to last month's hot weather, but the sudden cold snap in October made it even more difficult," said a spokesperson for a discount mart. "We're trying our best to curb price increases and source sufficient supply."