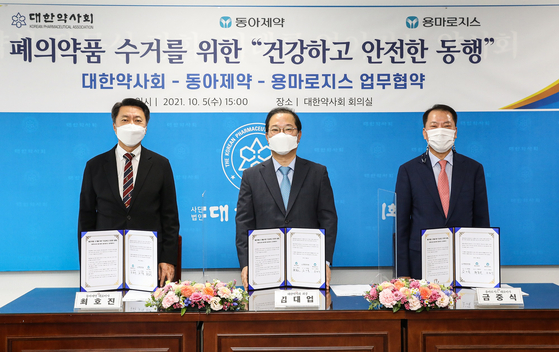 The goal of the MOU is to promote public health and to protect the environment by collecting unused drugs discarded in households.

Dong-A Pharmaceutical will oversee business operation and administrative support for the project in collaboration with local government and local branches of KPA, while Yongma Logis manages the logistic system to collect, store and transport discarded medication. Collected medication will be incinerated, Dong-A Socio Holdings explained.

KPA plans to promote the project and encourage the local pharmacist to actively participate, so that the unused medication can be collected via pharmacies.

Dong-A and Yongma also signed an MOU with Dangjin city government to cooperate on the unused medication disposal program.

“Unused medication discarded with other household waste severely contaminates the environment and causes harm to human through drinking water and food ingredient,” an official at Dong-A Socio Holdings said.

“We will continue to expand the unused drug disposal project in more regions, to promote public health and prevent environmental pollution.”

ESG? Dong-A has been doing that for decades.