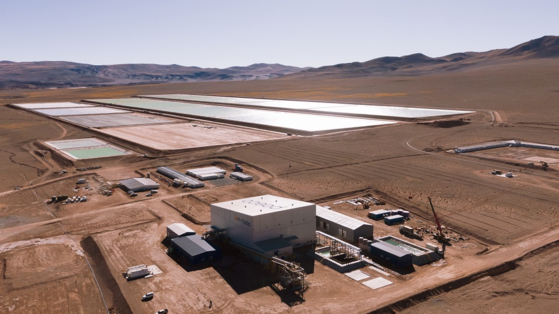 Posco’s demonstration plant in Argentina is on trial operation. [POSCO]

According to Posco, the value chain will cover every process of secondary battery production, from supplying raw materials, through manufacturing battery components such as cathode and anode, to rolling out finished products.

Posco will focus on the raw materials business as well as the secondary battery components, extending the domestic lithium business while ramping up overseas investment to secure raw material supply.

In a bid to make secondary battery materials its future core business, Posco is actively investing to ensure a stable supply of raw materials such as lithium, nickel and graphite.

Lithium, the core material of secondary batteries, plays an important role in generating and storing electricity.

In 2018, Posco made a deal to buy ore concentrate from which 40,000 tons of lithium can be extracted annually, from Australia-based Pilbara Minerals, and secured additional lithium supply by acquiring a 17,500-hectare salt lake in Argentina. The estimated deposits of lithium at the lake amounts to 13.5 million tons, six-fold the amount that was initially estimated before the acquisition.

The Argentine lithium plant is currently on a trial run, and will be producing 25,000 tons of lithium per year in the future.

The steelmaker aims to secure a total lithium production capacity of 220,000 tons by 2030.

Graphite is another core material used for cathode, a crucial component of secondary batteries. Posco acquired a 15 percent stake of Black Rock Mining, the Australian graphite developer, in order to diversify the supply chain of graphite.

Posco is also pushing ahead with high-purity nickel production. The steelmaker purchased a 30 percent stake in Ravensthorpe Nickel Operation to secure 7,500 tons of nickel, starting from 2024.

Moreover, Posco announced in July that a high-purity nickel refining factory will be constructed in the facilities of SNNC, Posco’s subsidiary manufacturing ferronickel. SNNC and Posco plans to annually produce 20,000 tons of eco-friendly high-purity nickel by 2023.

Twenty-thousand tons of high-purity nickel is sufficient for 500,000 EVs.

Posco is taking initiative in battery recycling as well, which sees the company extract nickel, lithium and cobalt from discarded batteries.

According to Posco, the secondary battery recycling market is estimated to be worth 28 trillion won ($23.8 billion) by 2040.

In September, Posco broke ground on a secondary battery recycling plant with annual production capacity of 12,000 tons at Yulchon Industrial Complex located in South Jeolla. The construction is expected to be completed by the end of 2022.

In addition, Posco strengthened its foothold by successfully recapitalizing Posco Chemical, securing 1.27 trillion won, and will increase investment in its anode and cathode material business.