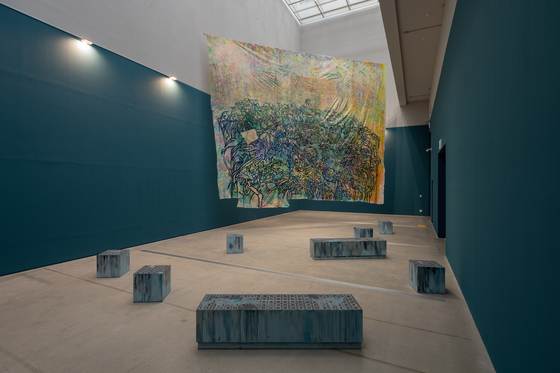 ″A Plastic Ecosystem,″ by Bang Jeong-a, stresses how we are living in a world surrounded by plastic. [NATIONAL MUSEUM OF MODERN AND CONTEMPORARY ART]


The Korea Artist Prize 2021, co-organized by the National Museum of Modern and Contemporary Art (MMCA) and the SBS Foundation, returned for its 10th edition at MMCA Seoul on Oct. 20.

The Korea Artist Prize is an annual award given to one of four participants, who are selected after being evaluated by local and overseas art experts. The final winner will be announced in the first half of next year.

This year, artists Kim Sang-jin, Oh Min, Choi Chan-sook and Bang Jeong-a, have been selected as the finalists. These artists deal with contemporary social issues through their respective fields of artwork. Four solo exhibitions, one for each artist, will run through March 20, 2022.

Though each exhibition consists of different messages and art forms, in the end they all serve as momentum for understanding and reinterpreting reality in these trying times. 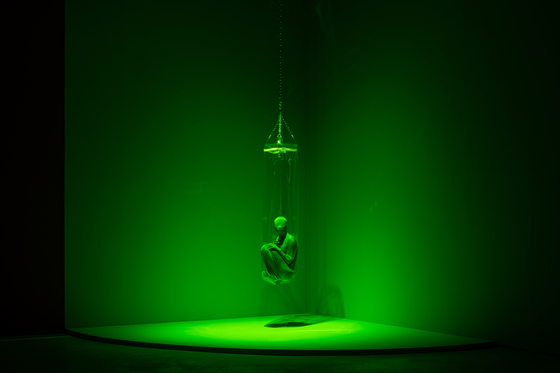 
In Kim’s exhibition, “Lamps in video games use real electricity,” Kim studied the paradoxical relationship between humans and virtual experiences, particularly the notion that humans exist somewhere in-between real life and virtual reality. The exhibition is a mixture of video and sound installation art, portraying Kim’s own perceptions and views on how social media, cryptocurrency and metaverse have an impact on our lives.

From a faceless mannequin stuck inside a transparent beanbag, a classroom with feet protruding from a spiraling ceiling, to a television screen showing a human-like figure marching in place from afar in a vast, empty plain, Kim’s solo exhibit is filled with eerie and eccentric pieces.

Their strangeness is perhaps what gives them such a deep, significant meaning. “Chroma Key Green” depicts a disappearing world, where people suffer from structural violence. Nonetheless, the person inside the hollow beanbag, who is in a contemplative state according to Kim, continues to live on.

To Kim, the concept of “disappearing” means the process of new lifestyles slowly emerging to replace traditional ones, formulating a new social order for the next generation. “However, this doesn’t happen overnight,” Kim told reporters during a press event held on Oct 19 at MMCA Seoul. “'Disappearing’ eventually means the same thing as ‘a new birth.’” 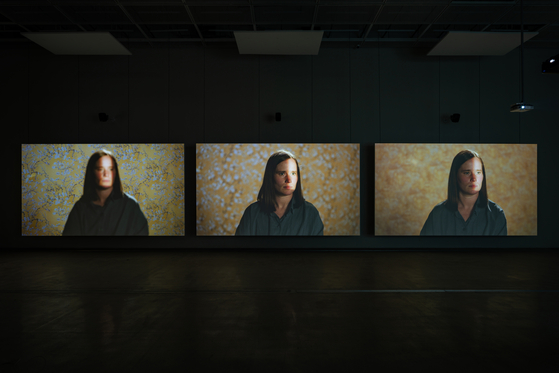 ″Heterophony of Heterochrony,″ by Oh Min. The artist refers to the videos as “time-based installations.” [NATIONAL MUSEUM OF MODERN AND CONTEMPORARY ART]


Oh’s “Heterophony” exhibition explores the nature of time through diverse experiments with music, sound and videos. The word “heterophony” is used in music to describe multiple individuals who simultaneously perform a single melody to create variations of it. Likewise, Oh divided different points of view of a particular situation happening on-set, through five screen projections, and captured on film how they change as time goes by. The artist makes use of various elements like lighting, camera angles, body movements and environment so that “Heterophony” forms one whole exhibition.

Oh explained that because “Heterophony” is also like an experimental lab, she doesn’t use the words “video” or “film,” but rather refers to her piece as a “time-based installation.” 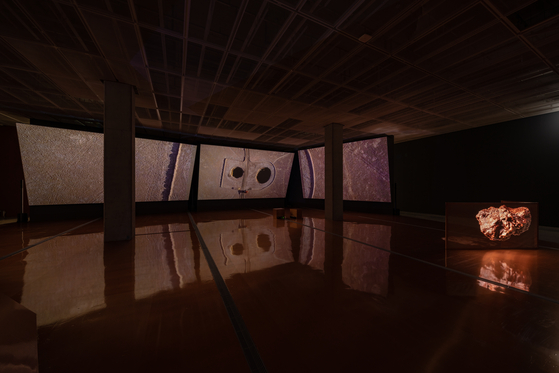 In ″qbit to adam,″ Choi Chan-sook digs into the history of land itself. [NATIONAL MUSEUM OF MODERN AND CONTEMPORARY ART]


Choi, as an artist who has largely based her work on migration and community, focuses on existence. Her exhibition “qbit to adam” represents the spectrum between the most basic unit of quantum information to the land that God presented Adam, the Bible’s first man, with. In simpler terms, it aims to dig into the history of land itself.

Choi made video installations about the land she visited while in the deserts of Chile. One example of Choi’s ideas regarding land is that traditional mining is very similar to the “excavation” of cryptocurrency today, because both require hard labor and utilize resources.

“The meaning and purpose of land has developed in correlation with the logic of capitalism,” Choi said. “When I say that cryptocurrency is being excavated, it is a figure of speech. Of course it is different than mining for gold in the past. However, they are similar in that they both require a great amount of depleted resources, like labor and capital, to ‘excavate,’ or rather produce them.” 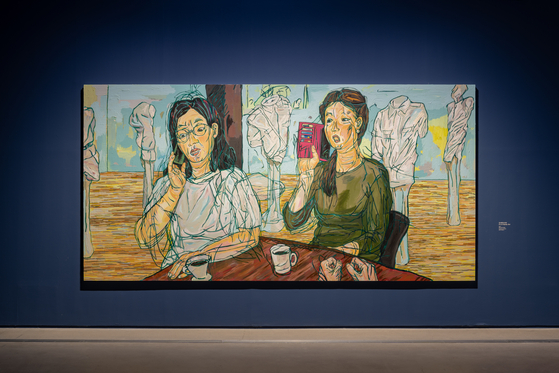 ″It's on display. But,″ by Bang Jeong-a [NATIONAL MUSEUM OF MODERN AND CONTEMPORARY ART]


Finally, Bang, who is based in Busan, applied some social and political problems that have arisen in her hometown into her artwork. Her exhibition, named “Heumul-heumul,” which is an onomatopoeic word describing a mushy, flowing state, represents how something seemingly strong and sturdy, like a relationship, can completely fall apart.

In “Heumul-heumul,” Bang attempts to illustrate politics in Korea and the plastic ecosystem that we live in. Her artworks do not explicitly describe figures in authority, nor do they intend to criticize. Rather, they try to manifest reality as it is.

One of the artworks, titled “A Plastic Ecosystem,” shows an acrylic painting on a patchwork of many different recycled fabrics. Even the rectangular stools in front of the patchwork art are part of the piece. The entirety of it stresses how we are living in a world surrounded by plastic.

Regardless of who ends up as the final winner, the Korea Artist Prize 2021 is meaningful in that it addresses the relationship between humans and the world we live in.

MMCA Seoul, located in Jongno District, central Seoul, is open every day from 10 a.m. to 6 p.m. On Wednesdays and Saturdays, it is open until 9 p.m. Entry is free to all.