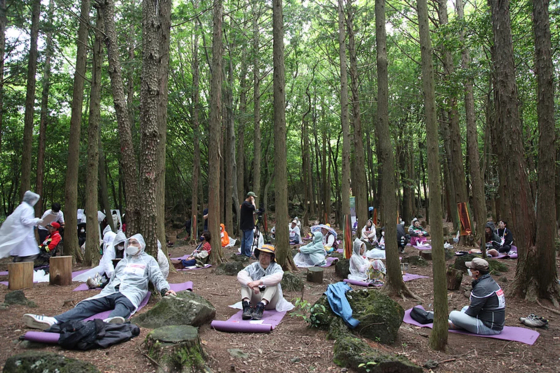 During this year's International Space-Out Competition, contestants zoned out in the forests of Seogwipo, on Jeju Island. [INTERNATIONAL SPACE-OUT COMPETITION]


In a digitally overflowing era, it is difficult for people to put their smartphones away. Those that are constantly overwhelmed with information often long for a moment to give their minds a pause.

This year, two competitions were held in Seogwipo, on Jeju Island in May and Hamyang, South Gyeongsang in September, where winners were chosen based on who was best at doing absolutely nothing. A Jeju-based hair stylist and a nursing student each took home a trophy shaped like “The Thinker” by French sculptor Auguste Rodin.

In an attempt to make a public performance out of the act of refreshing the brain, the International Space-Out Competition has been taking place every year since 2014. The contest, launched by local artist Woopsyang, has taken place all over Korea and even overseas, including Beijing, Taipei and Hong Kong. The rules are simple: Maintain a blank face and do nothing for 90 minutes, and the person with the most votes from the spectators and most stable heartbeat wins. 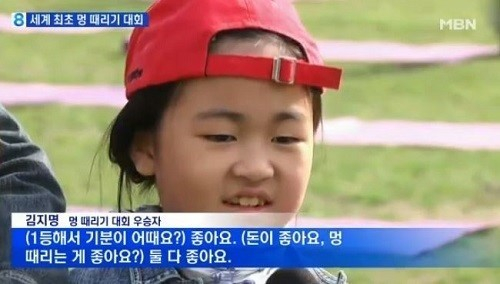 The first person who won the International Space-Out Competition was a nine-year-old girl who apparently always spaced out during her classes. [SCREEN CAPTURE]


The first-ever winner of the competition was a nine-year-old girl, whose mother told cable channel MBN that her daughter always spaced out during class at a hagwon (cram school), and decided to enter the contest after hearing about it.

The competition drew particular public attention when R&B singer Crush won first place in 2016. During the event, cable television network Channel A asked Crush why he decided to participate, to which he replied, “I recently released an album, and I wanted to give my brain a break.”

The contest is so popular that more than 3,000 people apply every year, but only about 50 to 80 people are chosen to compete.

“Although there were already a lot of applicants around 2016, the competition did indeed generate more publicity after [Crush’s participation],” the International Space-Out Competition told the Korea JoongAng Daily.

When asked how the participants are chosen, officials from the competition said that they aim to select a diverse range of people who vary in age and occupation. 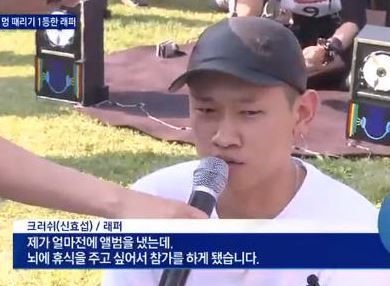 
There has recently been a surge of new media content related to “spacing out” — all of which aims to provide a time of peace and reflection as a retreat from stress and digital overload — on television, in local theaters and even on streaming platform Netflix.

The Korea Educational Broadcasting System's (EBS) “10 Minutes’ Nothingness” (2020-) has been airing hundreds of random scenes ranging from crawling snails to the process of manufacturing soju bottles, in a single long take that runs for a maximum of 10 minutes without any narration or subtitles.

The show, which was originally scheduled to be broadcast for only one year, was renewed for another year after building a core fan base, thanks to keeping “stimuli at its minimum,” EBS Executive Producer Chu Deok-dam told news outlet Media Today for the show’s one-year anniversary last August.

Chu said he created “10 Minutes’ Nothingness” after getting the idea for a show that portrays things from our daily lives in the complete opposite way of regular television shows that are typically “noisy and fast-paced.”

“You end up feeling hollow when you keep pursuing entertainment,” Chu said. “Of course it's entertaining to watch an hour of provocative content, but you’re left with nothing afterward. So [the production crew] wanted to create something that’s less triggering; where the viewers’ attention settles on something outward but their thoughts can settle inward.”

“10 Minutes’ Nothingness” is also available to watch on YouTube.


Cinema franchise Megabox released a short film titled “Fire Meong” (translated) (2021) last May, that had audiences staring at a crackling campfire for 31 minutes. It was screened for about a month at 22 cinemas nationwide, including Coex, southern Seoul; Seongsu, eastern Seoul; Sangam World Cup Stadium, western Seoul and Haeundae, Busan. Meong is the Korean term for the state of spacing out.

The short film is part of the “Mega Relax Healing” (translated) series, which will see more content related to spacing out released in the future. The next film, set to premiere on Nov. 4, will show the view from a plane window for 40 minutes. 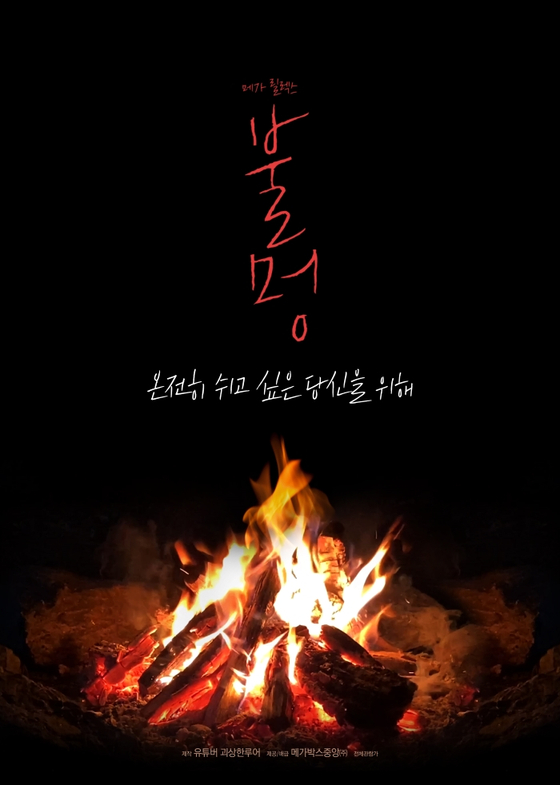 
CGV launched two short films, “Peace of Mind” (2021) and “Body Scan” (2021), which were part of the “Mind On and Off” (translated) series in June. These two movies were made in a collaboration with mobile app Lucid Island, which provides meditation and sleep-inducing content and featured natural scenery with soothing music and sound effects. Both films were screened at five CGV cinemas: Yeouido, Mokdong and Hongdae in western Seoul; Gangbyeon, eastern Seoul and Songpa, southern Seoul. However, unlike Megabox, there are no plans yet to release a third film of the “Mind On and Off” series in the near future, according to CGV.

Although these short films haven’t necessarily topped the box office, review comments on the cinemas’ respective sites called the movies “peaceful” and “relaxing.”

Netflix has its own streaming content on zoning out, for example the “Fireplace for your Home” (2010-15) series and “Moving Art” (2014-19). The “Fireplace” series offer the view and sounds of different old-fashioned fireplaces such as a crackling yule log.

“Moving Art” explores the beautiful natural scenery of oceans, forests and deserts all around the world with calm, comforting music. Three seasons are available to stream. 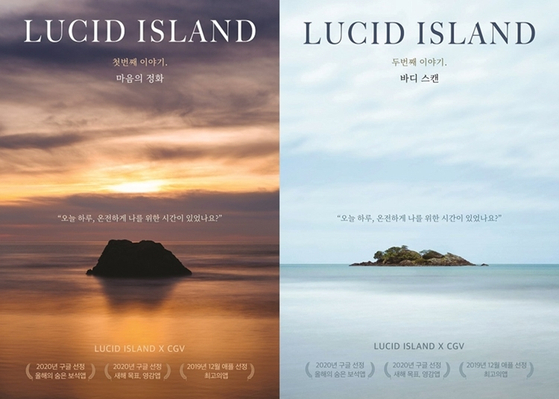 CGV's short films “Peace of Mind” and “Body Scan” are part of the “Mind On and Off” (translated) series, in collaboration with the mobile app Lucid Island. [CGV]


According to pop culture critic Jeong Deok-hyun, spacing out is a natural phenomenon that has arisen in the busy and bustling environment of the 21st century.

“Living itself has become complicated,” Jeong told the Korea JoongAng Daily. “There is so much to do, and even if you try to ignore it, the world just won’t leave you alone [because] the media ceaselessly produces new content and people have gotten tired of keeping up.”

Jeong admitted that scientific research papers regarding the effects of letting your mind wander freely have influenced the increase of such content, too.

Although consuming content that has virtually zero triggers may seem a bit ironic, when compared to the fact that television programs like SBS’s ridiculously provocative drama series “Penthouse” (2020-21) see massive success as well, both trends are ambivalent, Jeong said.

“The [seemingly opposite] feelings lie side by side. When people get exposed to too much stimuli from the outside world, they tend to think of life as dull [because they’re already used to it]. So while there are people who want something that goes above and beyond [like the plot of ‘Penthouse’], others just want to get away from it all and basically unplug their brains for a bit.” 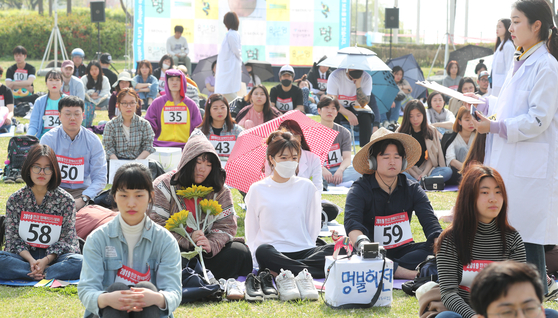 Contestants space out at the 2019 International Space-Out Competition at the Han River Park in Jamwon, southern Seoul. [JOONGANG PHOTO]


When asked if people wanting to keep their head in the clouds will turn out to be a trend, Jeong said he thinks otherwise.

“The present day media environment has become extremely complicated. It’s obvious that people have become more edgy and sensitive compared to the past. Speaking from the view of content strategies, I think such content [related to spacing out] will continue to thrive.”