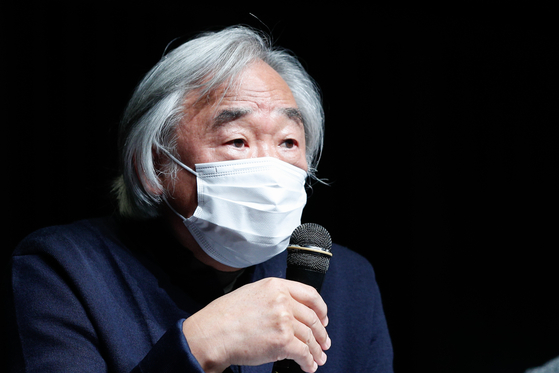 
Pianist Paik Kun-woo said Thursday that he’s filed embezzlement charges against Sohn Mi-ae, one of the sisters of Paik’s actor wife Yoon Jeong-hee. Paik also filed for arbitration to the Press Arbitration Commission, seeking a correction and 1.1 billion won ($940,000) in damages for himself and his daughter from MBC’s investigative journalism program “PD Note.”

“I hope the siblings of Yoon stop making false accusations and lies and leave us alone so that we can live peacefully,” said the 76-year-old pianist on Thursday during a press conference at the White Wave Art Center in southern Seoul. It was Paik’s first time making a public appearance to speak about the accusations made by his wife’s three siblings. The claim that he and his daughter Paik Jin-hee are not taking proper care of Yoon, who has been suffering with Alzheimer’s disease. Paik appeared at the press conference with his lawyer Chung Seong-bok.

“So far, I did not respond to any of the accusations related to Yoon as I wanted people to remember her as an actress,” Paik said. But after watching “PD Note,” which aired an episode on Yoon last month based on the “false claims” made by her siblings, Paik said he will no longer tolerate “any kind of false assaults and groundless assumptions against myself and especially my daughter, who has been taking good care of her mother. She’s been suffering from swarms of paparazzi in front of her house and I want to put a stop to this.”

Yoon, whose real name is Sohn Mi-ja, enjoyed great popularity as a movie star in the 1960s and 70s. She married Paik in 1976 and the pair had a daughter together while living in Paris. The daughter Paik Jin-hee is currently a violinist playing with an orchestra in France. Yoon is currently living in a separate apartment in Paris, two minutes away from her daughter's house.

The MBC program titled the episode “Missing Actor, Two Faces of Adult Guardianship” and raised suspicions that Yoon’s daughter, who is her guardian, is mistreating and neglecting her, but acting as her guardian in order to get her hands on Yoon's assets. Paik denied the claims saying that it is the siblings who want to get their hands on the money by becoming her guardian.


The conflict between the Paiks and Yoon’s siblings first came to light early this year when the siblings posted an online petition on the Blue House website, asking the government to help bring back “our beloved actor Yoon Jeong-hee, who is living like a prisoner in Paris.”

Yoon’s siblings had filed a lawsuit against the Paiks in relation to Yoon’s custody about two years ago, which they lost. Last November, the Paris High Court ruled that Paik and the daughter were to remain Yoon’s guardians.

“Yoon is living peacefully inside her own little world,” said Paik. “It’s her siblings who have a lack of understanding about Alzheimer’s patients and not being able to accept Yoon’s decision. Yoon is living in an ideal atmosphere right now. It is not good for her to make her suddenly live in a different environment. It is best for her to be closer to her immediate family.”

The reason for filing for arbitration to the Media Arbitration Committee, according to Chung, Paik’s lawyer, is to give MBC the chance to “correct its mistakes.”

“If this does not work out properly, we’ll take it to the court,” Chung said.


The lawyer added that Paik has also filed embezzlement charges against one of Yoon’s sisters under the Act on the Aggravated Punishment of Specific Economic crimes at Yeongdeungpo Police Station on Wednesday.

According to Paik, Sohn had been managing Paik’s payments for performances in Korea from the 1980s to 2019. Paik said that Sohn had inappropriately managed the money, misusing about 2 billion won without Paik’s knowledge.

“We will look into charging the other siblings for defamation” said Chung.


However, Yoon’s brother Sohn Byung-wook posted on his social media that “my sister had to exchange the money to Euros and gave it to Paik every time he visited Korea so that he could take the money to Paris,” and that “Paik is making false accusations to mislead public opinion.”