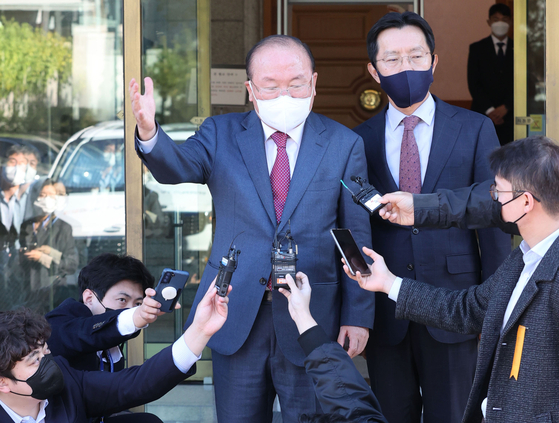 
The Constitutional Court voided the impeachment of a Busan judge whom the ruling Democratic Party (DP) accused of meddling in politically sensitive trials during the administration of President Park Geun-hye.

In a five-to-three decision, the nine-member Constitutional Court ruled Thursday afternoon that Judge Lim Seong-geun’s impeachment by the National Assembly in February was legally null and void, as the Busan High Court judge had already stepped down from his post at the end of his term when the DP and its allies impeached him in the legislature.

The impeachment of a judge requires the agreement of at least six out of the nine Constitutional Court justices.

Justice Moon Hyung-bae was the sole justice who argued that the case shouldn't have been heard in the first place.

In their majority ruling, the five justices said the plaintiff – Lim – could not be deprived of his post after he had already retired from his position on the Busan High Court at the end of his term, and upholding his impeachment was legally impermissible. The decision also noted that the court's impeachment trial served no beneficial purpose and was “legally inappropriate.”

Lim brought a constitutional lawsuit before the court after the National Assembly voted to impeach him in February. He is one of several judges who were criminally tried for abuse of power for allegedly meddling in politically sensitive trials during the previous administration.

While serving as chief senior judge of the Criminal Department of the Seoul Central District Court from 2014 to 2016, Lim came under suspicion that he pressured junior judges in politically sensitive cases.

Although he was indicted in March 2019 for meddling in trials that took place in 2015 and 2016, the Seoul Central District Court acquitted Lim in February 2020 but acknowledged his meddling was an "unconstitutional act."

After his acquittal, liberal lawmakers from the ruling DP and minor liberal parties pursued a campaign to impeach Lim. The lawmakers said they wanted to impeach him because he had pressured junior judges to revise their rulings to placate the administration, most notably in a case concerning President Park Geun-hye in 2015.

Tatsuya Kato, the former Seoul bureau chief for Japan's Sankei Shimbun, was indicted in October 2014 for defamation after writing a column raising questions about Park's whereabouts for seven hours during the sinking of the Sewol ferry on April 16, 2014, which killed 304 people. The reporter was acquitted in December 2015.

Lim, then a senior judge on the Seoul Central District Court, was accused of pressuring judges in the Kato case to specify in their ruling that Kato's claims about Park were groundless.

The judge was also accused of having intervened in a case involving two professional baseball players involved in illegal gambling overseas and in the sentencing of progressive lawyers arrested for allegedly obstructing police during a SsangYong Motor demonstration in 2015.

Just after lawmakers submitted the impeachment motion, Lim made a bombshell revelation that Supreme Court Chief Justice Kim Myeong-su stopped him from stepping down from the Busan High Court last year — so the ruling party could impeach him later.

Lim has attracted widespread support from the legal field, with over 155 legal professionals offering to support his cause before the Constitutional Court.