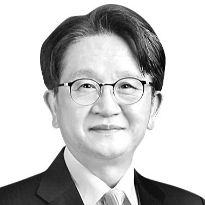 Park Chung-il
The author is head of AI and Big Data Cluster at law firm Class.

I have an image associated with the Korean Confederation of Trade Unions (KCTU). I have a strongly negative impression that the KCTU is a political group with vested interests that engages in selfish and uncompromising illegal strikes and blames others while defending its own flaws. Another problem is that it causes its own isolation by maintaining a passive stance on social dialogue and compromise. It is also criticized for only representing regular employees in major corporations and the public sector. Due to the “labor politics” of the “labor aristocrats,” the KCTU has a much bigger say in economic and social policies than it deserves.

When KCTU was founded on November 11, 1995, it proclaimed that its goals was to “improve the quality of life for all people through democratic reform of the society.” Now that 26 years have passed, is the KCTU following its mission statement? It has ignored the government’s repeated requests during the Covid-19 pandemic and went on to organize two illegal general strikes on July 3 and October 20. After-school meal preparation workers, caregivers and irregular workers at schools and civil servants participated in the strike. The umbrella union’s selfish behavior using young children was criticized.

KCTU must escape the vicious cycle of illegal labor activities. If it goes against the changes in the world as AI is changing the world entirely, the militant union may disappear in five years. In the age of AI replacing human labor, how should the KCTU transform itself?

First, it must accept the global new labor union paradigm. The outside world is pursuing labor reform of giving up regular employment and vested interests, improving rights of irregular workers and enhancing social responsibility. By unifying the labor movement and pursuing a rational path, political unions are on the decline. The economy is strengthening by making the labor market flexible.

Second, it needs to prepare for the post-Covid transformation. With the climate crisis and digital transition, the industrial structure is being reorganized. Much production and office work is being replaced by AI and robots. As existing manpower is reduced, the software sector is hiring more.

Re-education and training is required for the transfer in jobs to different industries. It needs to expedite job change training for the employment of union members. 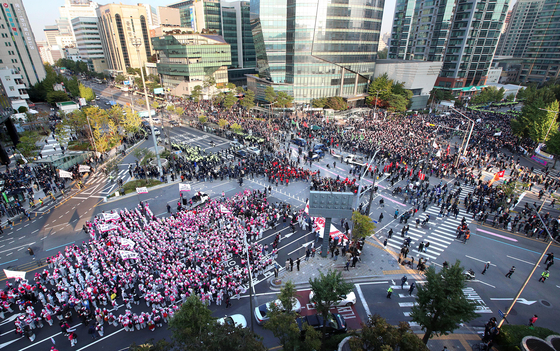 Members of the militant Korean Confederation of Trade Unions (KCTU) stage a massive rally in central Seoul on Oct. 20 to demand the rights to labor activities for all workers and the ending of discrimination against contract workers. [KIM SANG-SEON]

Third, it must adapt to changes of Generation MZ, a term referring to both millennials born between 1980 and 1995 and those in Gen Z, born between 1996 and 2010. The uncompromising struggle-oriented existing labor movement, rigid culture within the union and a lack of communication incur antagonism from the young generation. Rather than traditional methods of occupation, rallies, slogans and placards, the young generation of workers use social media to collect and release opinions. According to an online poll, 60 percent of the Gen MZ doesn’t want to join a union.

Fourth, the KCTU should respond to the change in labor due to the AI revolution. Existing manufacturing plants are replaced by smart factories, and labor is increasingly replaced by remote work and telecommuting. Companies expand flexible organization by outsourcing workers and by cloud sourcing.

Fifth, it must respond to the expansion of the AI platform job market. The digital transformation society divides labor into small units and outsources through the internet. As platform labor is expanding, permanent employment is decreasing. The KCTU must prepare for a decrease in union membership.

Sixth, a change of awareness about the labor movement is needed. The KCTU must pursue employment stability and expansion of the social safety network through social compromise, not struggle. It can wield influence when it helps unorganized workers, the self-employed and small-business owners.

The KCTU must open the door for changes with a new type of labor movement. Its members will all die with the analog mindset of the industrialization era. KCTU’s slogan has long been “Change the World.” But while it was fighting to change the world, it neglected changing itself. If it dilly-dallies without action, it can be swept up by the tsunami of the AI revolution and disappear. If the KCTU wants to change the world properly, it must change itself before it’s too late.