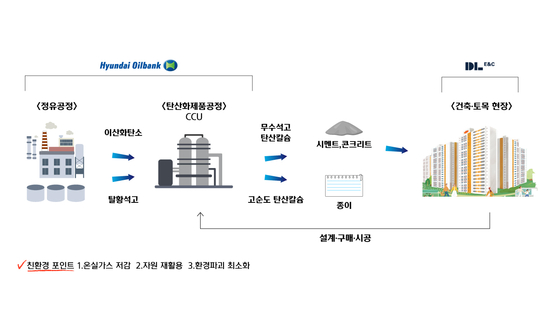 Hyundai Oilbank plans to construct a factory to produce 100,000 tons of carbonated products a year, and aims to expand the production to 600,000 tons in the future, the company said.

Relatively eco-friendly and low-cost, the carbonated products will be used as alternatives for building materials such as cement, concrete and light weight blocks. Carbonated cement and concrete is not only more environmentally friendly, but also more resilient.

Hyundai Oilbank is joining forces with DL E&C for the project. DL E&C will participate in the construction of the CCU plant built in the Hyundai Oilbank’s Daesan Plant in South Chungcheong, and also actively incorporate carbonated products in its construction projects.

Oil refiners use hydrogen in the desulfurization process. Hyundai Oilbank, too, generates 200,000 tons of hydrogen a year and emits 360,000 tons of carbon dioxide as a result.

Hyundai Oilbank is establishing the infrastructure to capture and utilize all of carbon dioxide emitted during hydrogen generation processes in collaboration with other companies. Hydrogen manufacturing processes, therefore, will become a blue hydrogen plant, for the first time in domestic oil refining industry.