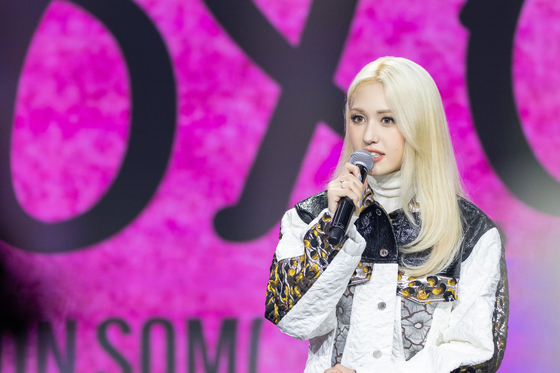 Jeon So-mi speaks during her showcase on Friday to introduce her first regular album ″XOXO.″ [THE BLACK LABEL]


Singer Jeon So-mi will be releasing her first full-length album “XOXO” at 6 p.m. today. Prior to the release, Jeon held an online showcase Friday and showed off some of the songs on the album.

The album comes three months after the singer released her single “Dumb Dumb” in August. It’s also her first full-length album since her debut two years ago.

The album consists of the title track “XOXO” and “Dumb Dumb” as well as new songs like “Don’t Let Me Go,’ “Anymore,” “Watermelon,” “Birthday,” “What You Waiting For” and “Otta My Head.”

Jeon also said Friday that she participated writing the lyrics for several tracks.

The song reached the top 10 in nine regions on the Worldwide iTunes Song Chart while the music video for the single surpassed 10 million views in 24 hours after its release.