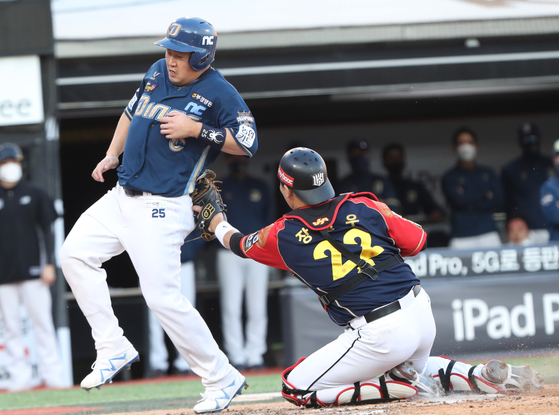 NC Dinos captain Yang Eui-ji is tagged out at the top of the sixth inning in a game against the KT Wiz at Suwon KT Wiz Park in Suwon, Gyeonggi on Thursday. [NEWS1]


The reigning KBO champion NC Dinos will not have a chance to defend their title in the playoffs this year, losing 5-2 to the KT Wiz on Thursday to fall outside of contention for the final two playoff spots.

The Dinos are the first reigning champions to miss out on a chance to defend their title since the Kia Tigers in 2010.

The Dinos won both the pennant and championship title last year, both firsts for the young club, and looked to be in a strong position this year as they returned with a largely unchanged lineup.

But what had started off as a disappointingly slow season for the Changwon club went dramatically awry in the summer, when the KBO was brought to a standstill by a Covid-19 outbreak that started with four Dinos players breaking social distancing guidelines.

Three members of the Dinos, tested positive for Covid-19 after four players — Park Sok-min, Kwon Hui-dong, Lee Myung-ki and Park Min-woo — breached Covid regulations by gathering in a Seoul hotel room with two acquaintances to eat chicken and drink beer ahead of a match against the Doosan Bears in early July. Two members of the Bears also tested positive for Covid-19.

The fallout left all four players suspended for the rest of the season, and the Dinos never recovered. Despite some outstanding individual performances — Yang Eui-ji leads the league with 109 RBIs and Na Sung-bum and Aaron Altherr jointly rank second for home runs with 32 each — the team as a whole was unable to make their way back up the table.

The Dinos have 66 wins, 67 losses and 9 ties with a winning percentage of 0.496 in seventh-place on the KBO table as of Friday morning, with two games left to play on the season.

The fourth-place Bears, fifth-place SSG Landers and sixth-place Kiwoom Heroes remain in contention for the final two playoff spots, all with a winning percentage — which determines the KBO standings — above .500.