Attendees, including Park Heong-joon, Busan mayor, and Mauro F. Guillen, Dean of the Jersey School of Business at the University of Cambridge, to the 8th International Conference for Attracting the World Expo 2030 to Busan held at the Korea Chamber of Commerce and Industry in Seoul on Thursday pose for a photo.

Jacques Attali, a French economist and former advisor to a French president, said the World Expo will drive new growth for both Busan and Korea.

“And become a golden key for future generations,” Attali said on Thursday during the International Conference for Attracting the World Expo 2030 to Busan.

Attali was among several scholars from home and abroad who attended the conference held in Seoul on Thursday. He attended virtually. 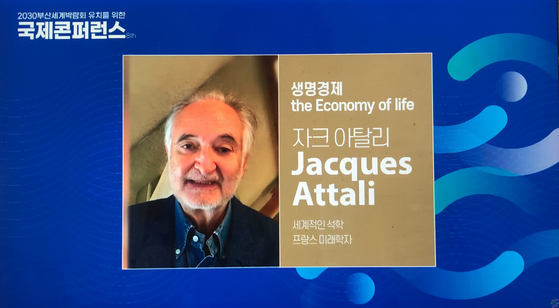 The Busan government has been holding the international conference every year since 2014. Ideas are exchanged for winning the bid for the World Expo in 2030.

The theme of the Busan Expo is “Transforming our world, navigating toward a better future.”

One thing that was agreed upon was that Busan as a city now transforming into an environment-friendly smart city is competitive against key contenders — Moscow and Rome.

Mauro F. Guillen, dean of the Jersey School of Business at the University of Cambridge, who recently published “2030: How Today's Biggest Trends Will Collide and Reshape the Future of Everything,” said Busan is a city that can show the world how a smart city has great infrastructure both hard and soft, and that it is possible to have a growing city that is globally connected and becomes a trade hub as well as a culture hub. 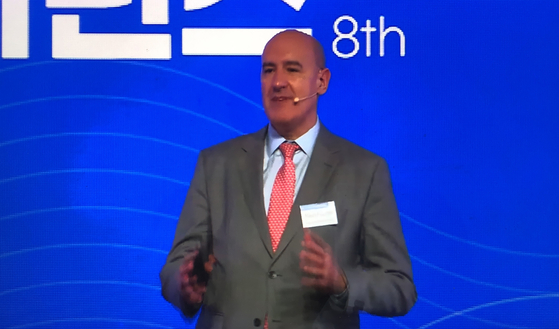 Mauro F. Guillen, Dean of the Jersey School of Business at the University of Cambridge. [SCREEN CAPTURE]

“By 2030 in the wake of all the change, this city at the southern tip of the Korean Peninsula can show the world what a high quality of life can be and what prosperity is like,” Guillen said. “That is the message Busan should be sending to the world.”

Busan mayor Park Heong-joon stressed that with the world undergoing a major transition today, there are no other places in the world better than Busan to host the World Expo as it is a city with a story of overcoming adversity and transforming into a major global trade hub.

“Humanity is going through a major transition including a digital transformation and an ecological transformation due to the climate crisis,” Mayor Park said at the conference. “With such major changes, we need a new vision where it is possible for people and technology and people and nature to co-exist, and there is no other better place than Busan in which humanity’s common visions are discussed.”

He said Busan is a symbolic city that has led in Korea’s dynamic transformation from a poor country to 12th largest economy, and from a country that used to receive aid to a provider of aid.

“Equipped with leading IT technologies, it is realizing its goal of becoming a global hub for trade ports and in countering climate change. We have set out our vision to transform the entire city into a carbon neutral city.

“It would be meaningful if humanity’s first step towards a new vision starts from Busan, a city that shows Korea’s past, present and future.”

This year, the conference was held at the Korea Chamber of Commerce and Industry headquarters in Seoul. Due to quarantine regulations, fewer than 50 people were allowed to attend on site. Some 400 or so viewed the conference, which was streamed online.

Qualcomm technology to be used in HDC buildings and cities