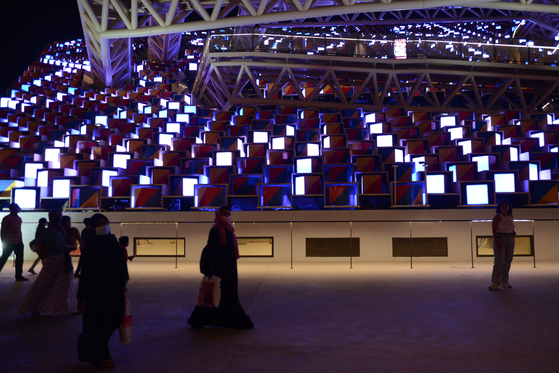 The rotrating cubes lits up after dark at the Korean Pavilion at the World Expo 2020 in Dubai. [LEE HO-JEONG]

DUBAI, United Arab Emirates -One of the main attractions at the 2020 World Expo is the battle for the 2030 World Expo.

While the event is being held in Dubai, the subtext is Busan, Moscow and Rome.

In 35-degree-Celsius (95-degree-Fahrenheit) heat, crowds descended upon the pavilions of the countries in which these cities are located.

According to the Korea Trade-Investment Promotion Agency (Kotra), the Korean Pavilion alone has an average of 4,577 visitors a day. Over the weekends, the figure goes up to roughly 6,000.

Tech and culture were the big draws on the 438-hectare site, with performances being held in a large open-air outdoor space.

Crowds shrieked when b-boys danced to the beat of Dynamite, the BTS hit.

Korea's theme at the Dubai Expo is "Smart Korea, moving the world to you."

"We chose mobility as it represents Korea's dynamism and the passion of the Korean people," said Ahn Yoo-seok, the head of the Korean Pavilion.

The Dubai Expo is split into three major districts — opportunity, mobility and sustainability.

At night, the Korean Pavilion looks entirely different from day as walls of rotating cubes — 1,597 in all — are lit up to create light patterns. 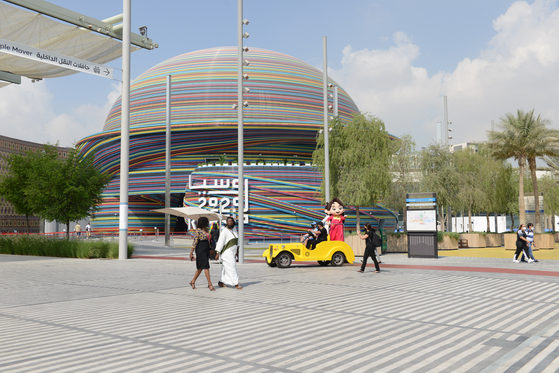 The Russian Pavilion, situated in the Mobility District not far from the Korean Pavilion, immediately catches the eye of anyone passing by with a colorful structure that resembles a cross between cotton candy and a balls of multicolored yarn.

The theme of the Russian Pavilion is "Creative mind-driving the future." It seems to showcase the erstwhile superpower's strength in science, particularly space exploration, and introduces the issue of creativity in the time of technology.

In the middle of the room on the second floor of the building is a huge model of a human brain lit with images.

On one end of the room are robotic arms that join a performance that shows the history of life from the Big Bang to the evolution of civilization, as well as technological development, including semiconductors and rockets.

In another corner, Moscow is pitched for 2030.

Italy give it its all with a 5.18-meter (17 foot) 3-D printed version of Michelangelo's David.

At the entrance is a hydrogen atomic clock developed by Rome's Leonardo S.p.A., accurate to a second every 3 million years, and a small stream that converts carbon dioxide into oxygen using algae. 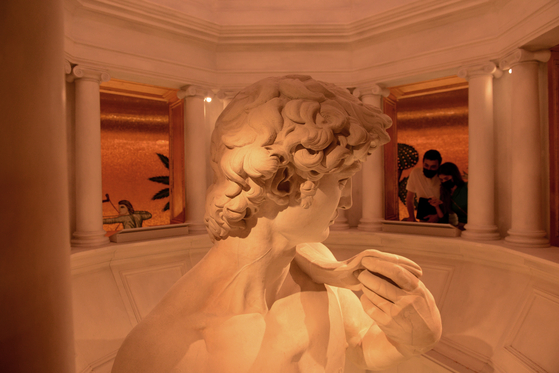 The statue of David at the Italian Pavilion. [LEE HO-JEONG]

Korea promises to put everything into its bid for 2030 despite the impressive displays by the competition.

"The World Expo is not something that is simply one dimensional," said Kim Young-ju, head of the Bid Committee for World Expo 2030 Busan. "It has to have a story."

He stressed that Busan is the story of a city that has not only triumphed over the worst adversities but transformed into a global center.

“From the ruins of war, and a port that received aid from abroad, [Busan] has grown into the second largest city [on the Peninsula] that is one of the largest ports in the world today and plays a central role in the region,” Kim said. "Culturally Busan is a city that has hosted numerous international events and meetings including the film festival, and leads in K-culture."

"It is a city that could give a lot of hope to other countries."

The Busan city government said it is allocating 20 billion won next year just on promoting the Busan Expo.

The money is especially targeted at the visit next year of the Bureau International des Expositions (BIE), which decides who holds the event by vote of its 170 members.

"We have set the direction of our presentations that are to be held in December to show Busan's strengths, including the future and the Korean value," said Kim Yoon-il, Busan deputy mayor. "But more important next year is the field evaluation."

Competition is expected to be particularly tough.

For Korea, it is the second attempt after Yeosu lost to host the World Expo in 2010 to Shanghai.

Busan turned in its application to host the World Expo in June under the theme of "transforming our world, navigating toward a better future."

For Italy, if it wins, it would be the first World Expo it has hosted in 15 year. The last expo held in the European country was in Milan.

"In visiting the Russian Pavilion, I have learned that they were enthusiastically promoting the 2030 World Expo, even having a special space," said Shin Sang-hae, head of the Busan city council. "It is something that we should learn from."

"I told the [Korean Pavilion staff] to be more aggressive including hanging up a sign saying 'see you at the Busan Expo in 2030' and streaming promotional videos," Shin said.

The competition "will all come down to what kind of content we will be able to deliver ," Shin said. "In 10 years, life will be much different from today's."
Bid Committee chairman Kim Young-ju said as competition is tough, support is coming from not only the government but also from leading Korean businesses. But most of all, it needs the support of the Korean people.

One of the key determining factors that will be looked by the BIE members during it field evaluation will be the public's enthusiasm.

Moon said Busan will be able to win votes particularly from developing countries as Korea is an example of a nation that has emerged as a leading global economy in a short period.

"This is the point we need to appeal to other nations in competing with other contenders such as Russia," Moon said. "Korea could win votes by sharing its common trait with other countries that are small but moving forward."

The minister also said Korea's abilities exhibited in recovering from Covid-19 as well as its adaptability towards the digital transition forced by the global pandemic and its efforts on carbon neutrality will work in its favor.

Sumanthi Ramanathan, destination marketing director of the World Expo 2020, while attending the International Conference for Attracting the World Expo 2030 to Busan online from Dubai on Thursday, stressed that the World Expo is a "long vision and a long journey."

"It is really important for the host city to select a theme that is true and authentic to your city but also more importantly something that will be relevant in 10 years," Ramanathan said.

Doubts center around whether holding a World Expo is still an appealing proposition.

World Expos used to be where new technologies and iconic structures were introduced: the telephone (1876, Philadelphia), the Eiffel Tower (Paris, 1889) and Ferris Wheel (Chicago, 1893).

But today leading technologies of tomorrow including the latest smartphones are unveiled at other exhibitions, such as CES, which is held every year in Las Vegas.

With the world changing ever so quickly, the question becomes whether a World Expo can present advances relevant by the time they are held.

"The World Expo is especially important for the people of Busan," said an official on the Bid Committee for the World Expo 2030 Busan, who requested anonymity. "Hosting the World Expo will provide a great economic opportunity for the city, especially upgrading its aging infrastructure that will create jobs."

Busan last month became the first major city in the country to become a super-aged society, with more than 20 percent of its population aged 65 years old or older.

The aging population is expected to cost the city.

According to Statistics Korea, the regional GDP per capita in Busan is 27.4 million won as of 2019. That's the lowest among the seven major cities in the country including Seoul. Seoul's is over 43 million.

Dubai Expo is projected to generate $33.5 billion of economic activity while creating 900,000 jobs.

The Korea Institute for Industrial Economics and Trade estimates that a Busan World Expo would boost the Korean economy by 61 trillion won and add 500,000 jobs.

If Busan wins the bid, Korea would be the seventh country to have hosted the world's three major events -- the Expo, the Olympics and the World Cup.


Other attractions in Dubai 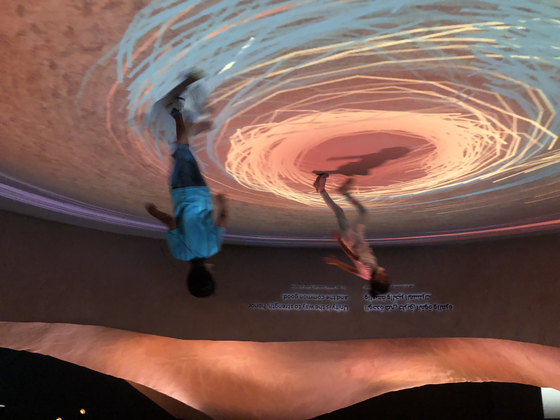 Digital lines appear on the floor everytime a person passes by at the Dubai Pavilion decorated with actual sand collected from the desert. [LEE HO-JEONG]


As the World Expo is held in Dubai, the UAE Pavilion is the biggest attraction. Shaped in the form of a falcon folding its wings, it presents the history of the UAE and its future through actual sand collected from the desert incorporate with motion detecting technologies. This includes a stream of lights that appears on the floor when visitors walk by. 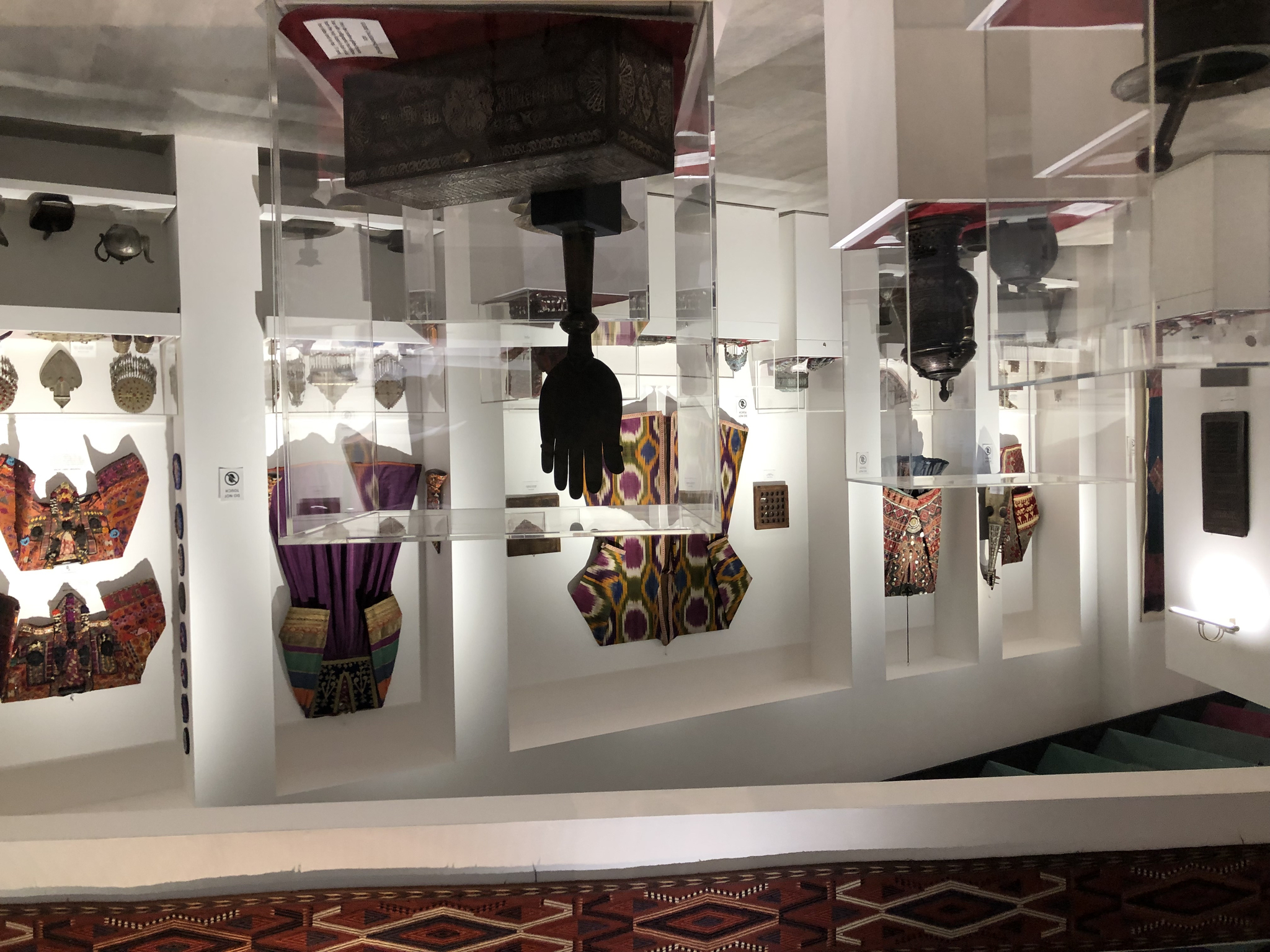 The Afghanistan exhibition at the World Expo in Dubai. [LEE HO-JEONG]


Not far from the UAE Pavilion is the Afghanistan exhibition where two staff members await visitors. Traditional artifacts, including clothing and jewelry, were displayed.

The Dubai Expo will be held through the end of March 2022.

While people still wear masks, UAE is 87 percent vaccinated. Korea is 73 percent as of Friday.