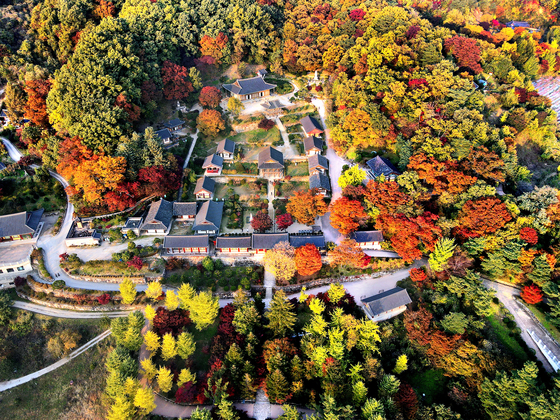 
One of the places people in Korea immediately think of when talking about where to go see the best fall foliage is Mount Seorak in Gangwon. Many hikers and photographers meticulously keep tabs on the mountain to choose the optimal time to make a visit.

It’s been tricky for them this year, as the expected prime time for the ultimate shades of yellow, red and orange has been delayed by about a week from the initial projection by the Korea Forest Service. The newly projected prime time is from last weekend to this coming week. On top of that, the fall colors on the trees this year have not been as impressive as the years before, as some trees are late in changing colors, or showing some faded fall colors. Experts say that the sudden change of temperature in October contributed to the increase in brown-colored leaves.

The elongated summer temperature of around 30 degrees Celsius (86 degrees Fahrenheit) lasted until early October but suddenly dropped in mid-October. A gradual change in temperature is most conducive to the leaves being brightly colored, but the sudden cold snap means that the green leaves turned brown more quickly, instead of transforming to yellow, red or orange first.

On Oct. 22, there were still many trees with green leaves on Mount Seorak, even with temperatures falling as low as minus four degrees Celsius.  Fall colors were seen from the top of the mountain down to areas at an altitude of about 500 meters (1,640 feet). It is expected that the prime time for fall foliage on Mount Seorak, which used to be around mid-October, will continue to be extended each year as summer temperatures lingering longer. 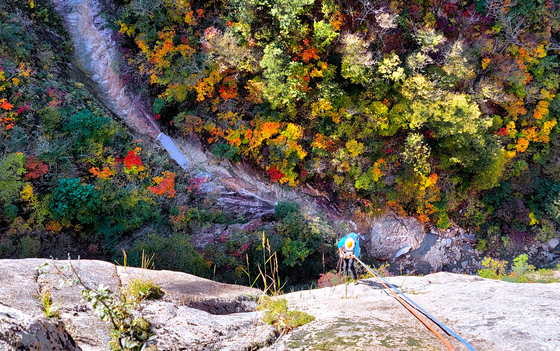 A rock climber on Mount Seorak descends toward so trees that are in the process of changing colors. [KIM SANG-SEON] 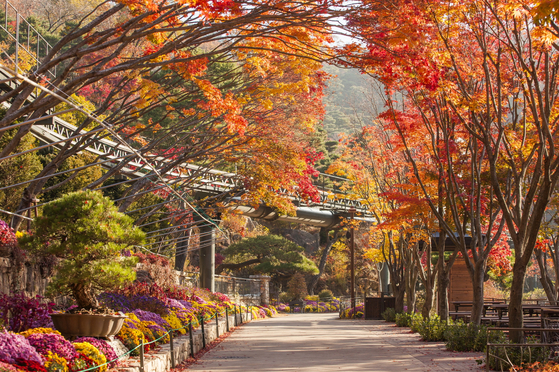 
Some of the fall-color hotspots like Buseok Temple in North Gyeongsang's Yeongju and Hwadam Forest in Gyeonggi, are also beginning to transform.

If you don't have time to travel to the fall colors hotspots, why not take a stroll around your neighborhood and enjoy the leaves there instead.

On Oct. 27, Seoul Metropolitan Government unveiled a list of 96 areas in the capital region where people can visit to experience the fall ambience. The areas around Mount Bukhan on the northern outskirts of Seoul have started to display the best combination of colors since the weekend, and the city government expects the streets in the city will show more colors from this week.

Out of the 96 spots it recommends, a total of six are new additions to the previous list of 93 spots released in 2019. Three from the 2019 list was removed due to construction in those areas.

Some of the new additions are Cheongpa-ro in central Seoul’s Yongsan District, filled with gingko trees and Uicheonbyeon-gil in northern Seoul’s Dobong District where you can enjoy the leaves with the faint sound of running water in the background thanks to the stream in the area. It is said the 96 spots combined total around 154 kilometers in length, with about 56,000 trees.

The city government has divided the areas into four different categories to make it easier for visitors to select where they want to visit. The categories are areas in the city surrounded by buildings, trails alongside streams or rivers, trails found in parks and short walks in different neighborhoods.

For more information about the 96 areas go to seoul.go.kr/story/autumn.

If you don’t mind traveling outside Seoul, Korean Folk Village in Gyeonggi is also a good spot to visit. The fall colors make a beautiful backdrop to the traditional Korean buildings called hanok, creating a uniquely Korean scene. The village also hosts outdoor music concerts on the weekends as well as interactive art project.

Korea Railway Corporation is offering a train travel package every Saturday and Sunday, to make it easier for those traveling from Seoul, until Nov. 14. It is offering one-day package to Mount Taegi or Chiak, as well as Mount Cheongpyeong in Gangwon, or overnight trips to spots a bit farther in Gangwon. The overnight trip includes a nighttime walk outside for stargazing.