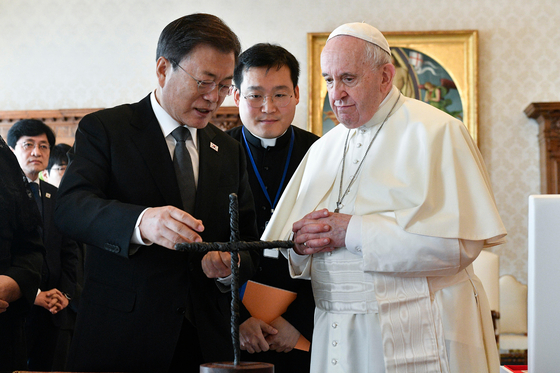 President Moon Jae-in, left, describes his gift to Pope Francis, right, during their meeting at the Vatican on Friday. The gift is a cross made from the barbed wires at the demilitarized zone separating the two Koreas. Moon held a private audience with the pope, their second time since first meeting in 2018. [YONHAP]


President Moon Jae-in and U.S. President Joe Biden met briefly on the sidelines of the G-20 summit in Rome on Saturday and discussed Moon’s request to Pope Francis that he visit North Korea for humanitarian purposes.

“The pope prayed for peace on the Korean Peninsula and said that he would visit North Korea if invited,” Moon was quoted by his office to have told Biden during their two- to three-minute encounter.

The office added that Biden in return congratulated Moon for “making progress” on the Korean Peninsula issue.

The two last met in June during the G7 summit in Britain. Despite Korea’s expectations of an official U.S.-Korea summit taking place on the sidelines of the G-20 summit, an official summit did not take place as of press time Sunday.

Pope Francis said he was willing to make such a visit, an affirmation he repeated during his meeting with Moon on Friday, according to Moon’s office.

“I hope that the efforts to engage North Korea to dialogue will continue,” Pope Francis told Moon, according to the Blue House. “We are praying for peace and unification of the Korean Peninsula. If an invitation comes from North Korea, I am willing to visit for the people of the Peninsula and for peace.”

The pope added, “I carry the Korean people in my heart,” when Moon told him about the role the Catholic church played in Korea’s democratization process.

Moon held a private audience with the pope followed by an open meeting with his aides, during which time Moon and the pope exchanged gifts. Moon presented the pope with a cross made with barbed wires from the demilitarized zone separating the two Koreas, which were melted and reshaped. The pope presented Moon with a commemorative plaque that depicts St. Peter's Square, produced by the Vatican's workshop, and a booklet containing photos and prayers. 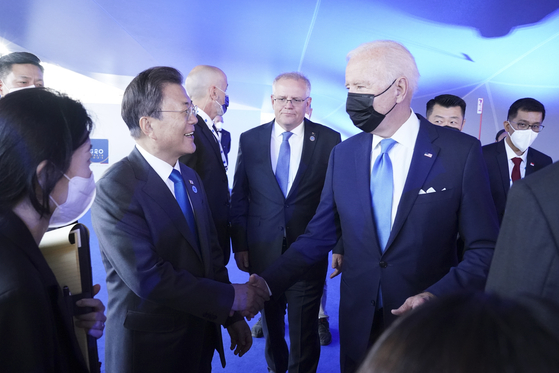 President Moon Jae-in, left, speaks briefly with U.S. President Joe Biden on the sidelines of the G-20 summit in Rome on Saturday. [YONHAP]


Moon, visiting Italy for the G-20 summit held from Saturday to Sunday, gave a speech on the importance of multilateral cooperation in combating the pandemic together.

“There is a huge disparity in the number of Covid-19 vaccines by country,” Moon said at session on international economy and health at the summit on Saturday. “Without increasing vaccination rates in all countries […] it will be difficult to fully recover.”

Moon emphasized that Korea is willing to provide “direct assistance to countries with vaccine shortages,” and stated its pledge to donate a total of $200 million to supply vaccines for lower-income countries through the Covax Facility, the World Health Organization's vaccine-sharing mechanism.

The session concluded with G-20 countries agreeing to ensure that 70 percent of the world’s population is vaccinated by mid-2022.

Moon was also scheduled to attend on Sunday a special meeting with the G-20 heads on the global supply chain, hosted by Biden.

From Monday to Tuesday, Moon will attend the United Nations 26th Climate Change Conference (COP26) in Glasgow, Scotland, where he is scheduled to announce Korea’s new 2030 nationally determined contribution (NDC) targets to reduce greenhouse gas emissions by 40 percent from the country’s peak in 2018.

In the third and final leg of his Europe trip, Moon will make a three-day visit to Hungary from Nov. 2. This will be the first visit by a Korean president to Hungary in 20 years, since former President Kim Dae-jung.

Moon will hold talks with Hungary’s President Janos Ader and with Prime Minister Viktor Orban on Nov. 3, and will meet with the leaders of the Visegrad Group (V4), the Czech Republic, Hungary, Poland and Slovakia in Budapest on Nov. 4, before concluding his European tour on Nov. 5.