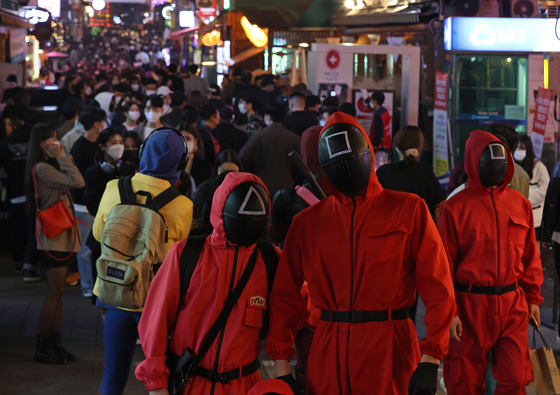 
This biggest chills and thrills at this year's Halloween celebrations in Korea came from the hit Netflix series "Squid Game."

Dozens of Younghees or giant robot dolls, game players in green tracksuits and the murderous masked guards in hot pink jumpsuits – all characters from "Squid Game" – appeared on the back lanes of Itaewon, southern Seoul, over the weekend, the epicenter of alcohol-fueled trick-or-treating.

But with these characters came a problem that hadn't arisen before: too many guns.

For "Squid Game" fans wanting to achieve the perfect armed guard costume, fake machine guns were an essential prop. Their sole purpose in the show is to shoot the losing players at the end of each game.


The National Police Agency on Saturday warned the public that the manufacture, sale or possession of a prop gun is prohibited in Korea, and that individuals caught with a simulated firearm over the Halloween weekend could face a five million won ($4,256) fine or even up to two years in jail.

Prop guns prohibited in Korea refer to ones made out of metal that do not “obviously appear as a toy gun” according to the police.

Prop guns that closely resemble real guns are prohibited in Korea as they have been used in actual crimes and, according to the police, can cause anxiety to others.

“We often receive reports from citizens who mistaken a prop gun for a real one,” said an officer of the National Police Agency on Saturday. “As we expect many people to dress up in 'Squid Game' costumes, we will be reviewing the specific laws regarding simulated firearms and crack down on the ownership of these props.”

"Squid Game" brought other more positive changes to this year’s Halloween in Korea.

Amid the coronavirus pandemic with daily cases now recording over 2,000, many people found playing childhood games that appeared in the series as an alternative to celebrating Halloween outside by drinking and partying.

“I wanted to enjoy Halloween but the idea of me going out to a bar and drinking without wearing a mask made me anxious,” said a man in his 20s who spent the weekend playing marbles and other childhood games from 'Squid Game' with his friends.

“This Halloween, I really felt that there were other entertaining ways to celebrate and enjoy the holidays apart from drinking.”

"Squid Game" tells the story of a group of people who play a series of childhood games under the notion that the final winner receives prize money of 38 million dollars, while all the losers get killed.