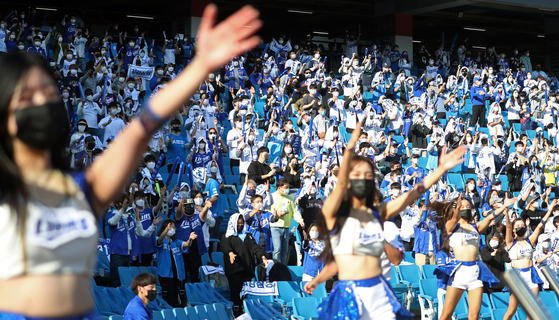 A crowd of over 12,000 watch a special tiebreaker game between the Samsung Lions and KT Wiz at Daegu Samsung Lions Park in Daegu on Sunday. The 12,244 tickets for the game, the most available for any game since the start of the Covid-19 pandemic, sold out in nine minutes, according to the KBO. KT won the game 1-0 to make it to the Korean Series for the first time in its history. [YONHAP]

Starting Monday, the “With Corona” scheme will allow 10 to 12 people to gather socially and most businesses to operate 'round the clock, despite daily infection rates of over 2,000 in recent days.


Under the first stage of Korea's three-phase “With Corona” strategy, the equivalent of the outside world's “With Covid” measures, limits on operating hours will be removed for most businesses starting Monday, which includes restaurants and cafes, theaters, PC bang (internet cafes), noraebang (singing rooms) and indoor sports facilities.

Clubs and bars that allow dancing will be required to close at midnight, and even that will be lifted in the second phase set to begin around mid-December. Curfew on hagwon (cram schools), set at 10 p.m. in the greater Seoul area, will be lifted from Nov. 22, after the Korean CSAT (College Scholastic Ability Test). The greater Seoul area consists of Seoul, Gyeonggi and Incheon.

Social gatherings will be allowed for up to 10 people in the greater Seoul area and up to 12 people in other regions, regardless of vaccination status. In restaurants and cafes, however, unvaccinated people will be limited to gatherings of four.

Vaccine passes can be a digital vaccine certificate from the COOV mobile application, a paper certificate or a sticker from local community service centers on ID cards. An unvaccinated person must present a negative PCR test result from the previous two days to get into those places.

People under the age of 19, those fully recovered from Covid-19 and individuals who cannot get a vaccine for medical reasons won’t be required to present a vaccine pass or a negative result.

As the passport system has met some resistance, the government will not implement it until Nov. 7, or until Nov. 14 for indoor sports facilities such as gyms and table tennis courts.

Mass events, including conferences, weddings, funerals and birthday parties for one-year-olds, a common Korean custom, will be limited to 100 people if they include unvaccinated people. If everyone has a vaccine pass or a recent negative test, the cap will be eased to 499 people.

The second phase is set to begin by early or mid-December, according to the Health Ministry, depending on its assessment of the first phase using the number of Covid-19 patients in critical condition and Covid-19 deaths. The second phase will be given a month or a month-and-a-half trial period, after which health authorities will make another assessment and decide whether to allow the country to move to the third phase.

In the third phase, there will be no restrictions on the number of people allowed to gather for personal social gatherings or for mass events.

In unveiling the three-phase “With Corona” scheme on Friday, the Central Disaster Management Headquarters, an inter-ministry bodies created to address the pandemic, said that since more than 70 percent of the population was fully vaccinated, "the time has come to move forward."

“The inoculation rate of 70 percent of the nation was quickly achieved […] and the government judged that the time has come to move forward with a new daily life together with all the people who have cooperated with the government's quarantine policy,” said the headquarters in its statement on Friday.

As of Saturday, 75.3 percent of the population was fully vaccinated, according to Korea Disease Control and Prevention Agency (KDCA).

The Ministry of Education also announced plans for a phased return to normalcy for schools, and to have classes operating as they had before the pandemic by the spring semester.

Currently, all students are attending classes in person in areas at Level 3 and below in the four-tier distancing scheme. Non-capital regions are at Level 3 or below.

Schools in regions under Level 4 restrictions — Seoul, Incheon and Gyeonggi — are allowed to offer in-person teaching with an attendance cap of one-half for third to sixth graders; two-thirds for middle schoolers; and 50 to 100 percent for 10th and 11th graders.

The attendance rate in non-capital regions was 94.4 percent and in the greater Seoul area 69.1 percent as of Tuesday.
Under the new measures, student capacity based on the social distancing levels will disappear, and all regions will be able to have full in-person classes from Nov. 22 after the Korean CSATs. If the number of virus cases increases dramatically, schools will be able to reduce the cap to three-fourths for third to sixth graders and two-thirds for middle to high schoolers.

With classes back to normal, schools are set to expand outdoor physical activities, group discussions and small-scale hands-on activities.

From the spring semester, full in-person classes will be held in all schools across the country. All extracurricular activities, afterschool classes and overnight field trips will be allowed.

The current antivirus measures in universities will be kept during the fall semester. They allow small classes, laboratory courses and other kinds of instruction requiring hands-on teaching to operate in-person.

The nationwide relaxation of the Covid-19 social distancing measures come, however, amid rising cases.

The average of daily cases in the past week was 1,829, which was 34 percent higher than the week before, according to Jeon Hae-cheol, minister of the interior and safety.

“Large and small outbreaks continue throughout the country, including an outbreak in hospitals in South Gyeongsang, and the possibility of spikes in cases related to gatherings for Halloween Day is also high,” Jeon said during a government meeting on Sunday.

Health authorities were put on alert as a total of 166 people were found infected as of Saturday at a psychiatric ward in a hospital in Changwon, South Gyeongsang, of whom at least 133 were breakthrough cases. According to the Changwon city government, three people — one hospital workers and two patients who were in contact with the employee — tested positive on Thursday. The hospital has been put under cohort isolation since Thursday.

“As thorough quarantine management is essential for the stable and continuous implementation of the gradual recovery of daily life, we ask that you continue to observe the quarantine rules in everyday spaces, such as wearing a mask indoors and outdoors, and regularly ventilating indoor spaces,” Jeon.

Korea added 2,061 new cases of Covid-19 infections on Saturday, of which nine were imported, according to the KDCA. Of the local cases, 756 were based in Seoul and 700 in Gyeonggi.

The accumulative caseload as of Saturday was 364,700. A total of 25,303 patients were being treated as of Saturday, of whom 332 were in critical condition.

A total of 19 people died from Friday to Saturday, bringing the total number of deaths to 2,849 at a 0.78 percent death rate.