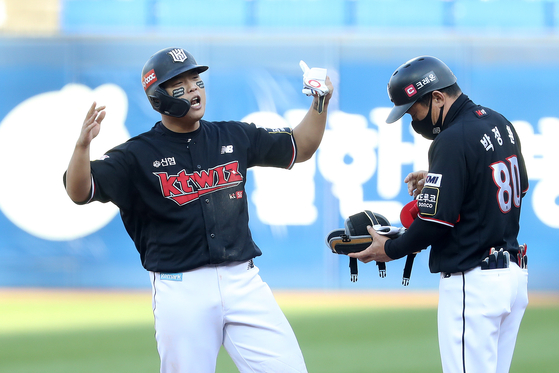 Kang Baek-ho of the KT Wiz roars in celebration after hitting an RBI in the sixth inning of a league-ending tiebreaker with the Samsung Lions at Daegu Samsung Lions Park in Daegu on Sunday. The Wiz won the game 1-0. [NEWS1]


A single swing of the bat bought the KT Wiz a ticket to the 2021 Korean Series on Sunday, when the Suwon club beat the Samsung Lions 1-0 in a historic tiebreaker game at Daegu Samsung Lions Park in Daegu.


Sunday’s game came after the KBO’s 144-game regular season ended on Saturday with the two top teams tied on exactly 76 wins, 59 losses and nine ties for a 0.563 winning percentage on the season.

Under league rules, the two top clubs were then required to play a tiebreaker to decide which team gets to bypass the playoffs and advance straight to the Korean Series.

Fittingly, Sunday’s tiebreaker was about as close as a game could be. KT wunderkind Kang Baek-ho provided the RBI single in the sixth that won it for the Wiz, with starter William Cuevas throwing seven shutout innings for the win.

Samsung starter Won Tae-in held his own in the pitcher's duel for the majority of the game, with the one sixth inning rally for the Wiz providing the only real offense of the game.

But as tight as the game was, the scoreboard is all that matters and Kang’s one run was enough to carry the Wiz through to the first Korean Series in the club’s history. The Lions get a bye to the second round of the playoffs, a three-game series that they will have to win if they want to join the Wiz in the Korean Series. 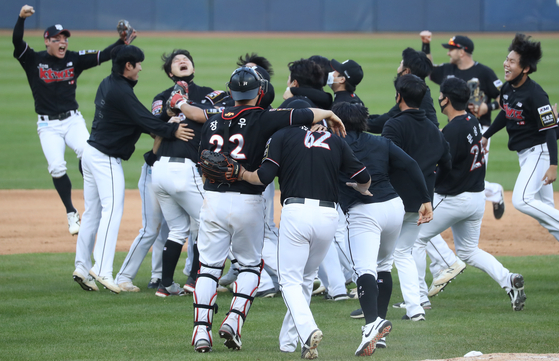 KT Wiz players celebrate after winning a league-ending tiebreaker with the Samsung Lions at Daegu Samsung Lions Park in Daegu on Sunday. [NEWS1]


If it hadn’t been for a KBO rule change a few years ago, it could have been the Lions en route to the championship.

Following that somewhat anticlimactic end to the 2019 season, the league decided to revise the rules to add a tiebreaker if there was no winner after 144 games. Had that rule not changed, the Lions would have advanced to the Korean Series this year with a head-to-head record of nine wins, six losses and a tie.


Sunday’s tiebreaker was actually the second in the league’s history. In 1986, the OB Bears — now the Doosan Bears — and the Haitai Tigers — now the Kia Tigers — finished the season with the exact same number of points, triggering a tiebreaker for the league title. That tiebreaker — played as a best-of-three series — was won by the Bears with two consecutive wins.

While Saturday’s games didn’t separate the top two teams, they did determine who else is headed to the postseason.

The LG Twins finish the regular season in third place and will advance straight to the first round of the playoffs.

The fourth-place Bears and fifth-place Kiwoom Heroes will play the Wildcard Series starting Monday. The Bears start the series with a one-game advantage, meaning the Heroes need two wins to advance, while the Bears could tie the first game and walk away victorious.

The sixth-place SSG Landers fell out of contention on Saturday with a loss to the Wiz, while the seventh-place NC Dinos dropped out of the race on Thursday, becoming the first reigning champions since the Tigers in 2010 to miss out on the chance to defend their title.

The Lotte Giants finish in eighth place, the Tigers in ninth and the Hanwha Eagles in 10th.

Sunday’s dramatic finale allows the KBO’s regular season to end on a much-needed high note after a difficult year where the combination of social distancing regulations, a Covid-19 outbreak and a poor showing at the 2020 Tokyo Olympics appeared to hugely impact the popularity of the league.

The 2021 season was overshadowed by a Covid-19 outbreak in the summer that started with players breaking social distancing guidelines.

The fallout left all four players suspended for the rest of the season and forced the KBO to cancel games for the week immediately before the Olympic break. A disappointing performance in Tokyo compounded the negative image, and the fact that stadiums remained shut for the majority of the season further decreased interest in the league.

Those days are hopefully now behind the KBO, with stadiums reopening to vaccinated fans last week and even allowing food and drink during the playoffs.

Yet despite the circumstances, there were some huge highlights for the league this year and several records broken.

The Wiz will now try to make some more history as they bid for their first championship title in the Korean Series from Nov. 14.

The 2021 KBO playoffs will begin with the Wildcard Series between the Heroes and Bears at Jamsil Baseball Stadium in southern Seoul at 6:30 p.m. on Monday.