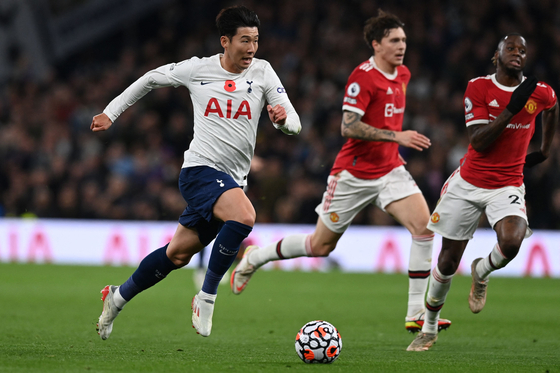 Tottenham Hotspur's striker Son Heung-Min runs with the ball during a Premier League match against Manchester United at Tottenham Hotspur Stadium in London, on Saturday.[AFP/YONHAP]

The game held some intrigue for Son Heung-min fans, as it pitted the Korean forward against Cristiano Ronaldo, the Portuguese star that Son has often referred to as his role model. The two have never met in the Premier League, with Ronaldo joining United in August from Juventus.

Son — who is often referred to as Sonaldo in tribute to the United player — was on the offensive early, with his first chance coming just five minutes into the match. Son failed to convert and didn't fare much better in the 24th minute, when he sent a Lucas Moura cross over the bar. 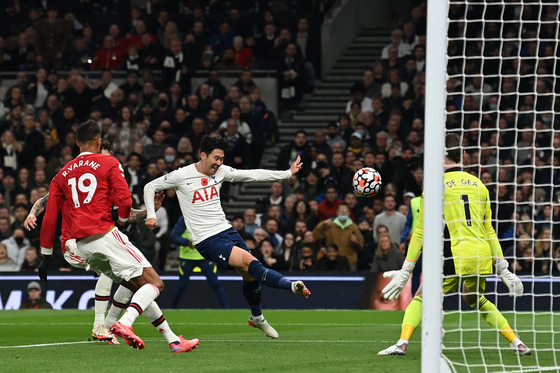 
Cristian Gabriel Romero thought he had given Spurs the lead in the 27th minute, but the flag went up and the goal was ruled offside.

Son had another chance a few minutes later, dribbling past the defense before falling foul of fullback Aaron Wan-Bissaka.

Ronaldo, on the other hand, lived up to his big name, scored Manchester United’s first goal in the 39th minute and assisting Edinson Roberto Cavani Gómez to score the second in the 64th minute.

While Ronaldo was rated an 8.5 for the match by WhoScored.com, Son was rated 6.23. Despite Son's three chances on goal in the first half, he failed to convert and missed out on his fifth goal of the season. Tottenham have now lost two matches in a row for five wins and five losses on the season. 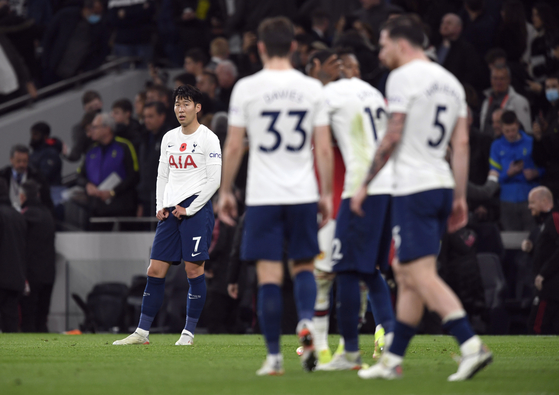 
The 3-0 loss in front of the home crowd increases the pressure on head coach Nuno Espirito Santo. Fans weren't shy of showing their disappointment, as they were were seen booing at the break, when Nuno substituted Lucas Moura for Steven Bergwijin and at the end of the match.

British football pundits were quick to criticize Spurs' lackluster performance, and Son and Harry Kane in particular, with Roy Keane and Graeme Souness lambasting the team on Sky Sports.

"They're relying on the people with a spark, Harry Kane, Son, Moura," Souness said. "None of them did that today, they all look a shadow of the players they've been in the recent past."