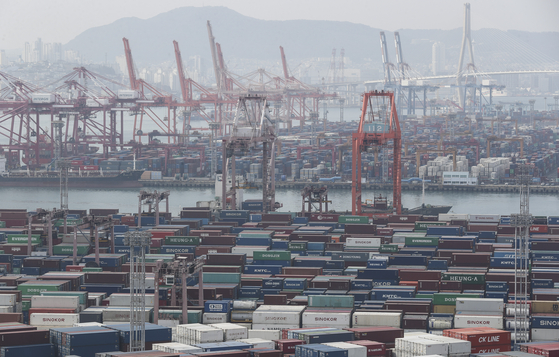 Export cargon piled up at a port in Busan on Monday. Export have increaed 24 percent year-on-year in October. [YONHAP]


Exports hit $55.5 billion in October, the second largest monthly amount since data started being compiled in 1956 and 24 percent higher than a year earlier.

The monthly record was hit the month before. September's exports were $55.8 billion, 17 percent higher than a year earlier.

According to the Ministry of Trade, Industry and Energy on Monday, Korea’s exports have increased year-on-year for 12 consecutive months, with double-digit growth since March.

Exports have exceeded $50 billion every month since March.

If the current momentum continues, Korea’s annual exports will likely break the annual record of $604.9 billion set in 2018.

As a result, October's trade surplus was $1.69 billion. Korea has been enjoying trade surpluses for 18 consecutive months.

Dubai crude, which is Korea's main imported crude oil, sold for $81.6 per barrel in October, nearly double the price a year ago.

Automobiles were among the few products that saw a decline compared to a year ago falling 4.7 percent to $3.8 billion.

The automobile industry has been struggling due to a shortage of semiconductors for vehicles. 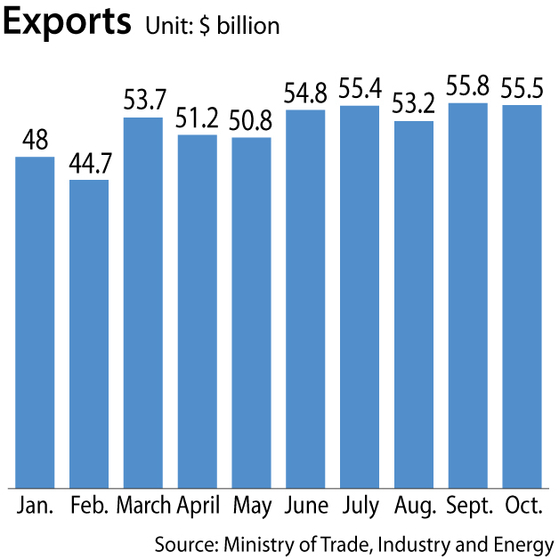 This is the first time in which Korean goods exported to nine major regions including China, the U.S. and EU have increased year-on-year for seven consecutive months.

“There are still risk factors existing including sharp increases in raw material prices, the spread of the [Covid-19] variants and problems in supply of parts,” deputy trade minister Moon said. “The government will employ all possible policy measures including lowering of gas taxes and increasing the management of parts supply chains to help the current export momentum to continue.”