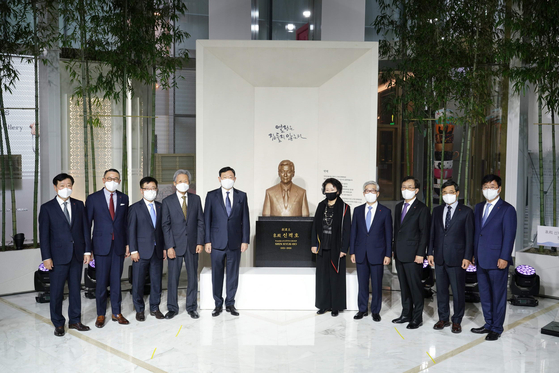 Lotte Corporation said it was celebrating Shin’s birth with an installation of a bust and the opening of a memorial hall in Lotte World Tower in Songpa District, southern Seoul, on Monday. A concert designed to “celebrate Shin’s spirit of challenge and passion” is scheduled for Nov. 3 at Lotte World Mall.

The opening of the memorial hall Monday was attended by group chairman Shin Dong-bin, Shin Young-ja, a former chairman of the Lotte Scholarship Foundation, and Song Yong-dok, a co-CEO of Lotte Corporation.

Shin’s bust is installed on the first floor of Lotte World Tower.

“Honorary Chairman Shin Kyuk-ho tried to make a company that is helpful to society and our neighbors based on a firm belief that Korea should become strong and its people should live well,” said Lotte Group Chairman Shin in a statement. “Let’s make Lotte’s future with our will and the honorary chairman’s spirit in mind.”

A book on Shin Kyuk-ho’s life will be published on Nov. 3.