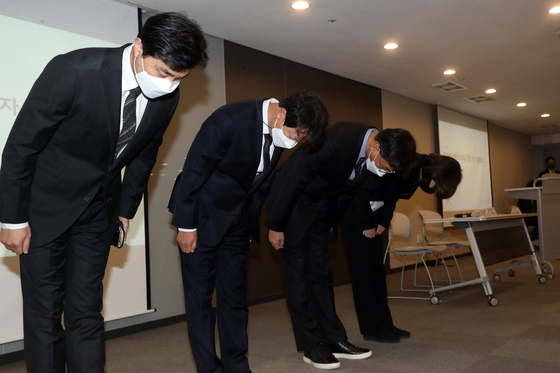 Executives at KT bow to apologize for a recent network failure at the telecom company's headquarters in central Seoul on Monday. [YONHAP]


KT will spend 40 billion won ($34 million) to compensate customers affected by a recent network failure, paying an average of 1,000 won to all its mobile and broadband users.

For subscribers running their own businesses, the compensation announced Monday will average 8,000 won.

Customers will have the compensation deducted from their monthly bills in December.
“I sincerely apologize for causing inconveniences to the people who trust KT,” said KT CEO Ku Hyeon-mo.
“We will try our best to restore trust by executing compensation in a swift manner,” Ku said in a statement.

KT is Korea's largest broadband internet provider with 9.3 million users and its second-largest cellular service with 14.4 million subscribers as of the first quarter, according to the company.

KT's networks stopped working around noon on Oct. 25 due to the wrong input of a command by a KT contractor, disrupting communications of tens of millions of individuals, stores and companies across the nation.

To prevent the recurrence of such an accident, the company also announced a set of measures.

It plans to expand an existing virtual testbed system so that any technical glitch can be detected during trials of critical work such as setting new network pathways.

In the latest case, KT failed to detect the error during two rounds of verification carried out before the command was inputted.
Also on the cards is adding more dedicated back-up networks in different forms to prevent both fixed and wireless networks from going down together.

The network routing work that caused the outage was conducted during the daytime, although the outsourced entity reported to KT that it would be done between 1 a.m. through 6 a.m. The contractor proceeded with the task without an on-site supervisor from KT.

The company will set up tighter work guidelines with its contractors.

In the process of inputting commands, a contractor will be required to receive authorization – based on one-time password - from KT’s supervisor.