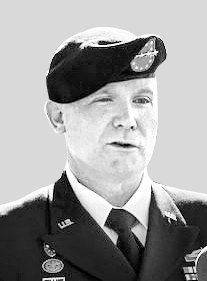 United States Forces Korea (USFK) commander Paul LaCamera visited the Panmunjom Joint Security Area (JSA) on Friday and promised that the United States would defend South Korea in the event of war, according to military sources on Sunday.

Describing the JSA as a “frontline of freedom,” LaCamera pledged that the United States would defend South Korea on a Friday visit to the area with its iconic blue houses that straddle the border between the two Koreas.

The USFK commander’s announcement at the Panmunjom JSA, a highly symbolic location within the Demilitarized Zone (DMZ) where security guards from both North and South Korea tensely face each other, came as a South Korean parliamentary audit of the state intelligence agency revealed the North demanded the end of joint allied military drills as one of the pre-conditions for talks to formally end the 1950-53 Korean War.

The JSA is where the 1953 armistice suspending hostilities between the two Koreas and their allies was signed, although a peace treaty was never concluded.

The Unification Ministry said separately on Monday that it will begin discussions with the U.S.-led United Nations Command to resume tours to Panmunjom as South Korea began easing Covid-19-related restrictions.

Tours to the Panmujom JSA were suspended in July after health authorities imposed strict anti-disease regulations in the greater Seoul area.

In line with the loosening Covid-19 restrictions and the high vaccination rate among soldiers, which currently stands at 94 percent, the Defense Ministry also said Monday that it would lift social distancing restrictions for military personnel, allowing them to go off base on weekdays.

The ministry said it would authorize visits to soldiers from unvaccinated members of the public, so long as the visitors tested negative on a Covid-19 test within 48 hours of their scheduled visit.

Although the defense ministry initially allowed off-duty soldiers to leave their bases on all weekdays starting in February 2019 – a change from the previous policy, which allowed them to leave base only twice a month – that policy was suspended after the Covid-19 pandemic gripped Korea.

However, the defense ministry said it would continue to restrict soldiers’ outings on weekends and overnights off-base.

The military will also maintain its current policy of allowing a maximum of 20 percent of a base’s manpower to go on leave at any point in time. Soldiers returning from leave must submit to two PCR tests, and those who are unvaccinated must also undergo a 14-day period of isolation.

Newly conscripted soldiers entering training for the first time will continue to be tested for Covid-19 on their first and eighth day of enlistment, with additional tests conducted depending on their base situation.

Those entering military service without being vaccinated will be administered a vaccine at a military hospital.

The Defense Ministry is also in consultations with health authorities to obtain booster shots, beginning with 3,000 medical staff at military hospitals this month. The military plans to give additional vaccinations to all soldiers who want it from January to February next year.