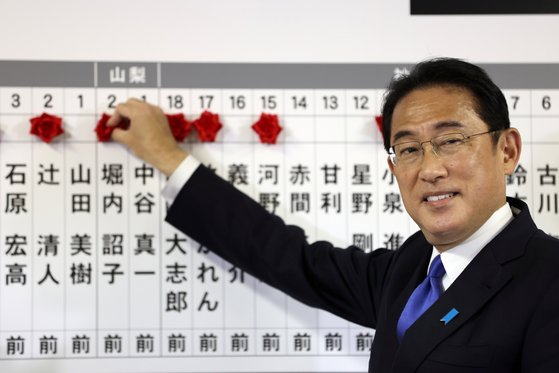 Japan's prime minister and ruling Liberal Democratic Party leader Fumio Kishida puts rosettes above the names of successful general election candidates on a board at the party headquarters in Tokyo on Oct. 31. [BEHROUZ MEHRI/AP/YONHAP]


The comfortable win Sunday by Japan's Liberal Democratic Party (LDP), the ruling party of Prime Minister Fumio Kishida, will likely lead to a continued decline of Korea-Japan relations through next year, according to some experts in Korea.

“It's no secret that Prime Minister Kishida is more keen on focusing on U.S.-Japan relations than on Japan-Korea relations, and [the recent election result] will mean that there are less reasons for Japan to try to improve ties with Korea,” Jin Chang-soo, former president and current senior research fellow on diplomatic strategy studies at Sejong Institute, told the JoongAng Ilbo on Monday.

The LDP won 261 seats out of 465 in the lower house of the parliament on Sunday. The conservative party was also in power during the administrations of Kishida’s predecessors, Yoshihide Suga and Shinzo Abe. To be more exact, the party had rarely not been in power, since its foundation in 1955.

Korea and Japan failed to see eye-to-eye on a number of historical issues during previous administrations, all stemming from Japan's occupation of Korea from 1910-45. These include the forced laborer and "comfort women" issues.

Comfort women is a euphemism used to refer to the women forced into sexual slavery by the Japanese military before and during the Pacific War. Estimates of the number of comfort women range from tens of thousands to as many as 410,000, many of Korean descent.

Korea and Japan signed an agreement in 2015 to address the comfort women issue, which included an apology by Tokyo and a 1-billion-yen ($9 million) fund for the victims. The bilateral agreement received backlash from the victims and civic groups at the time because of a lack of transparency, and the Moon Jae-in administration said it will not scrap the 2015 deal but underscored that it was not a true resolution to the issue of Japan’s wartime sexual slavery.

A number of landmark rulings by the Korean Supreme Court since 2018 has further chilled diplomatic ties, including one ruling that ordered Japan's Nippon Steel & Sumitomo Metal to compensate victims of forced labor during World War II. Around 500,000 Koreans are estimated to have been subjected to forced labor in Japan at the time.

In one of his most recent statements on the issue, Kishida was quoted by local media outlets to have said during a plenary session of the parliament on Oct. 13 that he will strongly demand Korea provide acceptable solutions to the forced laborer issues.

Tokyo has also differed from Seoul on its stance on Seoul’s agenda to formally declare the end to the 1950-53 Korean War.

During the Korea-U.S.-Japan nuclear envoys’ meeting in Washington on Oct. 19, Japan’s director-general for Asian and Oceanian affairs at Tokyo's Foreign Ministry, Takehiro Funakoshi, reportedly told Korea’s nuclear envoy Noh Kyu-duk that “North Korea has been repeatedly raising tensions on the Korean Peninsula,” when Noh requested his support to declare the end to the war.

“Japan agrees with the premise that a ‘diplomatic approach’ is necessary to resolve the North Korean nuclear issue, but it firmly maintains its stance that it cannot agree that the method of such an approach should be the declaration of an end to the Korean War proposed by South Korea,” a diplomatic insider told the JoongAng Ilbo on Monday. “Rather, Japan is focusing on condemning North Korea's nuclear development and missile launches and focusing on strengthening deterrence, which shows a significant gap with South Korea's approach to bringing North Korea to the table for dialogue.”

Both President Moon and Prime Minister Kishida will be attending the United Nations 26th Climate Change Conference (COP26) in Glasgow, Scotland, through Tuesday. Several Japanese media outlets including the Mainichi reported that Kishida was hoping to meet with U.S. President Joe Biden during the conference, but did not mention any possibility of such a summit with Korea. There were also no announcements by Seoul on a possible summit on the sidelines of the conference as of press time Monday.