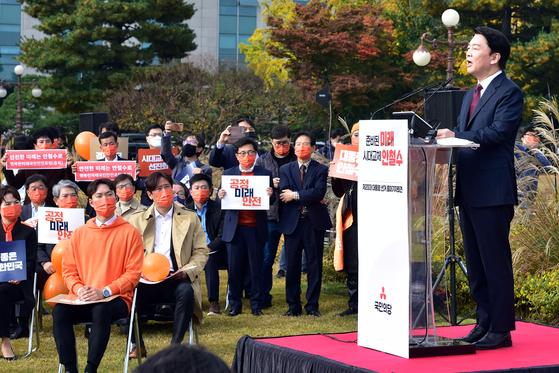 
Ahn Cheol-soo, chairman of the minor opposition People's Party, declared his third presidential bid on Monday at the National Assembly.

Ahn's announcement turns the the presidential race in Mach into a four-way race between the ruling Democratic Party (DP), the main opposition People Power Party (PPP), the minor progressive Justice Party and the People’s Party (PP), although it is possible the PP leader could make an election alliance with another candidate later in the race.

The 59-year-old former medical doctor and software entrepreneur declared his bid at the National Assembly, running on a platform of security and greater social equality.

Arguing that it was time to break the “vicious” cycle of what he characterized as disappointing five-year presidencies, Ahn said that the country needs a president “who can make a better Korea, and a president who can open a new era.”

In a reference to his scientific and business acumen, Ahn promised to rely on scientists and technocrats to build a country strong in science and technological innovations.

While his party’s election candidate nomination committee is open to applications for a primary over the next two days, Ahn is expected to be the PP’s candidate.

Ahn made his familiar argument that the public is disillusioned with Korea’s long-entrenched political factions, and that he is the only contender who can serve a five-year presidential term without the taint of corruption.

He also pledged that if elected, he would submit to a mid-term evaluation of his presidency and that he would resign if his approval rate failed to reach 50 percent.

In response to questions from reporters about the likelihood of his joining forces with another candidate in order to field a single opposition presidential candidate, Ahn said he is running to win and that he will wrest control of the Blue House from the ruling Democratic Party.

Monday’s announcement by Ahn is his third presidential bid.

In the November 2012 presidential election, Ahn withdrew from the race less than a month before the polls opened, lending his support to the main opposition candidate Moon Jae-in.

Following the impeachment and removal of President Park Geun-hye from office, he ran independently of the major political parties in May 2017  and finished third, garnering 21.41 percent of the vote.

The main opposition party is scheduled to elect its candidate on Friday, with the likely nominee being former Prosecutor-General Yoon Seok-youl or lawmaker Hong Joon-pyo, who was the main conservative candidate in the 2017 election.

In April, Ahn lost against Oh Se-hoon in a contest to become the single opposition candidate in the Seoul mayoral by-election. Afterwards, he sought to merge his party with the PPP, but no agreement was reached in the end.